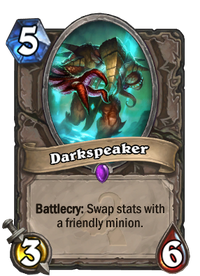 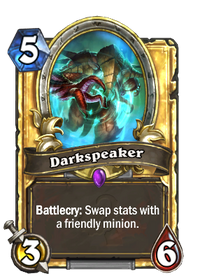 People often think that Darkspeaker is the arch nemesis of Lightspeaker, but that title actually belongs to Heavyspeaker.

Darkspeaker is an epic neutral minion card, from the Whispers of the Old Gods set.

Darkspeaker can be obtained through Whispers of the Old Gods card packs, or through crafting.

With a fairly solid body that will be swapped, Darkspeaker's Battlecry can be used to buff a weaker minion that has a strong ability independent of its stats, like Acolyte of Pain, Armorsmith, and Mana Tide Totem, or to take the stats of a powerful minion with a large drawback, like Eerie Statue, Anima Golem or any big minion that you've played a Power Overwhelming on.

Even if the Darkspearker swaps stats with a Totem, Imp, or other small minion, its 3/6 stats can be put to immediate use by the recipient minion (assuming it isn't exhausted), making it almost comparable to Charge.

Darkspeaker R'khem is a level 80 elite faceless one quest giver inside the Saronite Mines in Icecrown.

Having been chained by the vrykul, he offers the quest Mind Tricks. After completing the quest, he will disappear, making noises that translates as laughter in the player's mind...