Set on the mysterious Darkmoon Island, Silas Darkmoon welcomes all.

Darkmoon Faire cards are available through the following options:

Darkmoon Island is the location of the Darkmoon Faire. It is small, forested, and roughly circular. The Faire is the primary attraction on the island, although some wild animals live in the woods and water. The island is only accessible once each month, during the week of the Darkmoon Faire. 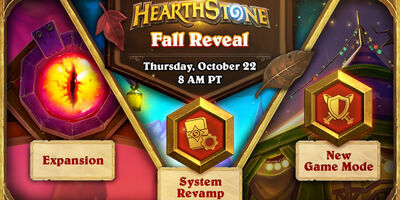 On July 14th, 2020, the official Hearthstone YouTube account referenced one of their folders to the Darkmoon Faire.[1]

On October 15th, 2020, the Hearthstone YouTube account released a teaser titled Come One, Come All!, which depicted the Darkmoon Faire entrance looking around, before blinking and becoming the eye of C'Thun. It gave October 22nd for the reveal date.[2] The following day, the Hearthstone channel scheduled a livestream, the thumbnail of which revealed the content to be a new expansion, mechanical changes to card packs, and a new gamemode.