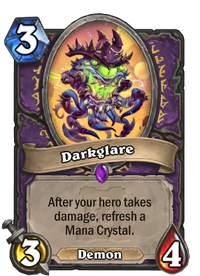 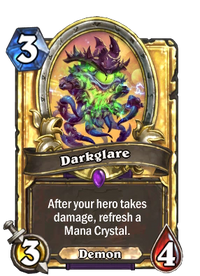 After your hero takes damage, refresh a Mana Crystal.

He's got a dark glare, but he sees crystal clear!

Darkglare is an epic warlock minion card, from the Ashes of Outland set.

Darkglare is best used in an aggressive deck that can make use of self-damage effects like Raise Dead, Flame Imp, Neferset Thrasher to gain mana which can be used to flood your board with minions early on in the game.

It is recommended to avoid using Supreme Archaeology as finishing the quest will take away a source of damaging your hero.

In Arena, Darkglare has great stat line and powerful effect by using Life Tap allowing you to play additional cards in Arena providing a board advantage.

Prior to Patch 18.2, Darkglare was able to refresh 2 Mana Crystals instead of 1, making Life Tap free to cast as long as you had the initial 2 mana to use it. Getting a second Darkglare in play was extremely valuable, since you would gain 4 mana each time your hero takes damage. This often lead to extremely powerful combos in Wild, particularly with cheap self-harm cards like Flame Imp in combination with cards like Floating Watcher and Molten Giant.

A darkglare is a floating, horned, one-eyed or five-eyed octopus-like demon similar to an observer. Little is currently known about them.