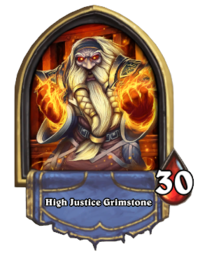 As you descend through the mountain, you find yourself trapped in the Dark Iron Arena!

Dark Iron Arena is a boss encounter found in the Blackrock Mountain adventure. It is the second encounter of the adventure's first wing, Blackrock Depths.

High Justice Grimstone is the enemy hero for the encounter. 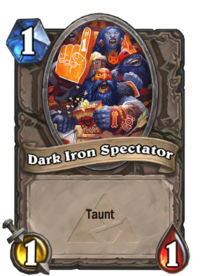 Classes that can ping the 1/1 Taunt minions from High Justice Grimstone's hero power with their hero power have an advantage in this fight: Mage, Druid and especially Rogue whose hero power can kill 2 minions per activation at the cost of a little health.

Cards like Assassinate and Shadow Word: Death can take care of his more difficult minions. 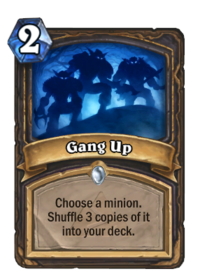 Nefarian
The Dark Iron Arena. This should be a good test of your abilities, mortal.

High Justice Grimstone
Ladies and gentledwarves! Have we got a show for you today!
The greatest legends of Azeroth vs. a single adventurer!

High Justice Grimstone
Nobody can survive against all these legends.

High Justice Grimstone
The audience is getting restless. Ahahaha!

High Justice Grimstone
Put your hands together for the skeleton in a dress, Bloodmage Thalnos!
Get ready for story time with the cuddliest Pandaren: Lorewalker Cho!
Aw, come on. Who let him into the arena?
Back from his latest fishing trip, master angler Nat Pagle!
Next up, the Bananamaster himself: King Mukla!
A round of applause for the great inventor himself, Tinkmaster Overspark!
Let's hear it for Feugen!
Can Stalagg survive the arena? Let's find out!
He's raising his son to follow in his own hoofprints. Make some noise for Cairne Bloodhoof!
Coming to you all the way from the mission after this one, it's Emperor Thaurissan!
Straight from New Tinkertown, please welcome the leader of Gnomekind, Gelbin Mekkatorque!
Please welcome the level 11 gnoll who became a legend in his own time. Hogger!
Who needs eyeballs when you got twin warglaives? Certainly not Illidan Stormrage!
It's the giant spider! And how do you pronounce her name? Maexxna!
His vocabulary is limited, but his rage is not. It's Mogor the Ogre!
She's burning with eternal hatred just for you. Please welcome Sylvanas Windrunner!
It's the gnome who's far from home, give a warm welcome to Toshley!
His favorite food is gnome, but he is willing to make an exception. It's the Beast!
Oooh. It's getting hot in the arena. Please welcome Baron Geddon!
I hope nobody is sitting in the splash zone, because our next challenger is Dr. Boom!
He's been mechanically tuned for maximum destruction. It's Foereaper 4000!
They don't call him the Dragonkiller for nothing. Put your hands together for Gruul!
Our next challenger is hiding behind the controls of an old shredder. Who could it be?
Lifebinder! Dragon Queen! Brawler in the Dark Iron Arena! It's Alexstraza!
Ladies and... Oops! Out of time!
Straight from the Dustwallow Marsh and Stormwind Castle, get ready for Onyxia!
Oooh! Ladies and gentledwarves! The one, the only, DEATHWING!
Recently refurbished and ready to wreck, it's the Flame Leviathan!
Silence please! We have a special guest. Warchief Vol'jin himself!
It's the elemental lord who loves to swat insects: Al'Akir!

High Justice Grimstone
Hjt! Huh? Whoa! *Death gasp*
Nefarian
Keep this up and Ragnaros will soon be purged from this mountain!
Ragnaros
I'LL PURGE YOU, YOU SCALY WHELP!

The sooty stone halls of Blackrock Depths form a dim, sprawling city whose subterranean streets are filled with Dark Iron dwarves. The Dark Irons are enslaved to the will of Ragnaros the Firelord, and that's a pretty time-consuming job. When they’re not slaving away, however, they make time for fun! Brawls in the Grim Guzzler, brawls in the Ring of Law . . . really just brawling everywhere they feel like brawling.

You'd never think it, but the Dark Iron Dwarves have some pretty strong ideas about their version of Blackrock justice. Uther might not agree with them, but hey, this isn't Uther-rock Depths! Emerge victorious from this trial by combat and two copies of the Rogue spell Gang Up will be yours to keep![1]

High Justice Grimstone appears when a player stands on the mesh circle at the center of the Ring of the Law inside Blackrock Depths. He is flagged red, but cannot be attacked; his purpose is to explain what happens during the Ring of Law boss event.

Ring of Law is an encounter at the Ring of the Law in Blackrock Depths, overseen by High Justice Grimstone.

The event is started when a player stands on the mesh circle at the center of this area. The entrance to the ring is closed, and High Justice Grimstone appears in the ring. This dark iron dwarf is flagged red, but cannot be attacked; his purpose is to explain what is about to happen.

There is only one punishment for crimes committed against the Dark Iron dwarves: death. Ancient tradition calls for the guilty to pay the blood price in the Ring of the Law by battling savage creatures gathered from across Azeroth. To date, it is unknown if anyone has ever survived this brutal crucible. 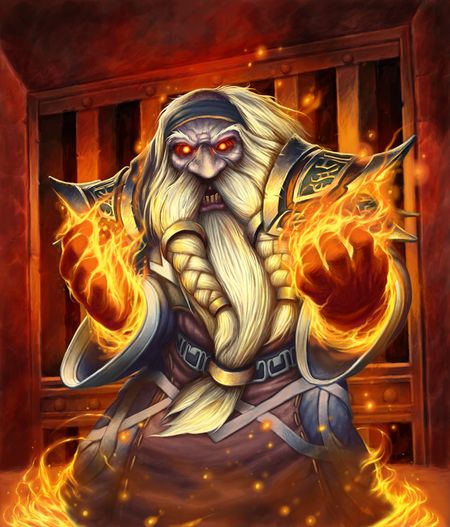