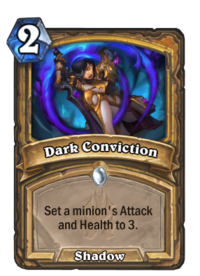 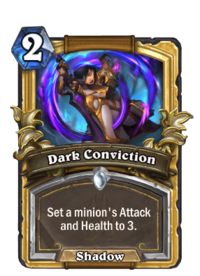 Set a minion's Attack and Health to 3.

In his court, Uther is judge, jury, AND executioner…

Dark Conviction is a common paladin spell card, from the Knights of the Frozen Throne set.

Dark Conviction can be obtained through Knights of the Frozen Throne card packs, or through crafting.

A spell version of the Wild card Keeper of Uldaman, which can be used to buff your own minions or weaken your opponent's. While this card lacks the 3/4 minion that comes with its effect, its cheaper cost of 2 mana makes it easier to pull off in the early game and can help to buff friendly minions played on Turn 1, such as Righteous Protector.

Alternatively, this spell can be used as a fake heal on a similar stats car. When on friendly minions, it will count for Galvadon.

Lynessa Sunsorrow will use this card randomly, so, try to use it on enemy minions when combining with her.

Dark Conviction was a passive death knight talent which increased the chance to get a critical strike with a melee weapon by 1% per rank, up to 5. It was removed with Cataclysm.