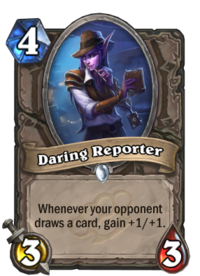 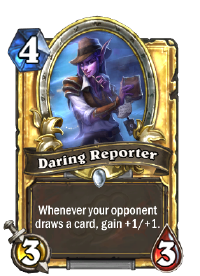 Whenever your opponent draws a card, gain +1/+1.

She's working on a story! While skydiving!

Daring Reporter is a common neutral minion card, from the Mean Streets of Gadgetzan set.

Daring Reporter can be obtained through Mean Streets of Gadgetzan card packs purchased online from the Battle.net shop, or through crafting.

Combos well with cards that make your opponent draw cards, such as Coldlight Oracle, Naturalize and Nat, the Darkfisher. Beneath the Grounds and Iron Juggernaut also synergies well with this card, as it counts towards her stats.