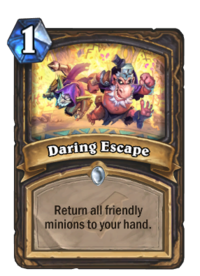 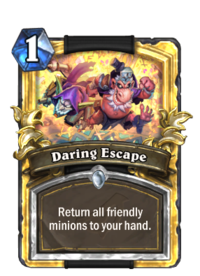 Return all friendly minions to your hand.

Impossible to cast without cackling evilly.

Daring Escape is a common rogue spell card, from the Rise of Shadows set.

Daring Escape can be obtained through Rise of Shadows card packs, through crafting, or as an Arena reward.

Daring Escape is best used with cards that have impactful Battlecry or Combo effects. Much fittingly, Heistbaron Togwaggle is one of the best minions to return to hand with this spell. If played in the same turn as Togwaggle and a Lackey, Daring Escape can help to preserve the lackey until Togwaggle is played again.

In wild, Daring Escape is very useful for completing the rogue quest, The Caverns Below. Note that Patches the Pirate can also be returned to hand when trying to return Swashburglar or Southsea Deckhand in early turns, which is a huge disadvantage considering Patches is a 1 mana 1/1 when played from hand.