For the boss of the same name, see Dancin' Deryl.

Dancin' Deryl is a hero that the player can pick in the Battlegrounds game mode. 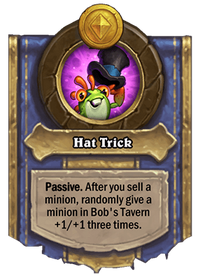 Dancin' Deryl is a powerful hero when played right. To maximize his Hero Power's potential, load up your board and/or hand with minions (especially token summoning minions), then once you roll a minion you want to buff, wait to restock your Coins, buy all the minions you don't want as soon as possible, then sell all your minions so all the buffs go to that particular minion. You can get a massively buffed minion quickly using this method, which in turn also makes your triples extremely powerful. Minions that make great use of increased stats, such as Divine Shield minions, Magnetic minions (when magnetized to Mechs with Divine Shield), Cave Hydra, Security Rover, and Foe Reaper 4000 are all good targets for Hat Trick.

Some of the best minions to buy and sell are Murloc Tidehunter, Sellemental, Alleycat, Murozond, Tavern Tempest (they all grant 4 buffs if played the right way), Primalfin Lookout (only if your board contains at least one Murloc or Amalgadon), Steward of Time (will stack hero power buff with it's own selling buff) and Freedealing Gambler (free 2x +1+1). Other minions that would likely help during combat to get "free" cards would be Gentle Djinni and Nat Paggle.