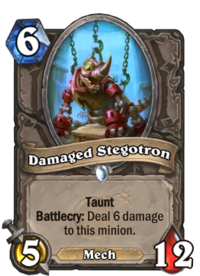 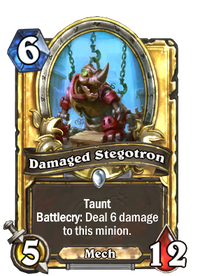 Battlecry: Deal 6 damage to this minion.

Sadly the warranty does not cover fireballs or acts of Boom.

Damaged Stegotron is a common neutral minion card, from The Boomsday Project set.

Damaged Stegotron can be obtained through The Boomsday Project card packs, or through crafting.

Damaged Stegotron is comparable to Injured Blademaster as an overstatted minion which deals damage to itself to average stats. However, this minion has Taunt and so has greater immediate impact on the board. When played alone, Damaged Stegotron remains a respectable 5/6 Taunt, but nothing too outstanding.

Like Injured Blademaster, this minion benefits from being Put into battlefield directly through effects such as Resurrect and Gather Your Party. It also benefits from Priest heals and can be used to boost Warrior cards such as Battle Rage and Frothing Berserker.

Notably, this minion is one of the most powerful Taunt minions in the game in terms of raw stats, and so can find a good home in a Taunt Druid deck running only big Taunts with Hadronox.

Damaged Stegotron is evidently a mechanical recreation of a stegodon.