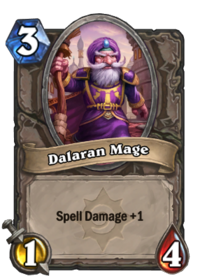 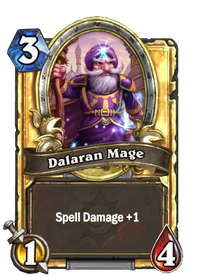 You don't see a lot of Dalaran warriors.

Dalaran Mage is a neutral minion card, from the Basic set.

Two copies of Dalaran Mage are automatically included in all players' collections upon unlocking the mage class.

Two Golden copies of Dalaran Mage are a reward for raising a mage to levels 59 and 60.

Dalaran Mage is uncraftable and cannot be crafted or disenchanted.

Dalaran Mage is a straightforward Spell Damage minion, increasing the output of your damaging spells by 1. With 4 health it can survive a few hits, and can even be used for killing weaker minions. Ideally though, players will want to shield the Mage behind a Taunt or two, and use him to boost any of your damaging spells that come along.

Compared to Ogre Magi, the Mage is a cheaper option, exchanging lower mana cost for the lack of Attack. The Mage is also a lot sturdier than the cheaper Kobold Geomancer, although he has less Attack than him, too.

Summon
I am master of magics!

Dalaran was one of several kingdoms that emerged as the Empire of Arathor declined. Long ago, most human magicians lived in Strom. Many fledgling wizards left the restraining confines of Strom behind and traveled to Dalaran, where they hoped to use their new powers with greater freedom. Wanting a place more suited to extensive use and study of magic, they traveled north to the recently founded city of Dalaran, located in the Alterac Mountains region. There, these magicians used their skills to construct the enchanted spires of Dalaran and reveled in the pursuit of their studies. More wizards followed, and the city became a haven for magi and a center of arcane study. The citizens of Dalaran tolerated the magicians' endeavors and built up a bustling economy under the protection of their magic-using defenders. With the mages of Dalaran protecting non-magic using inhabitants with powerful protection spells, Dalaran became a decadent, extravagant paradise. Dalaran was also built atop a massive ley line.

The wizards's overuse of magic with no proper protection or regulation, though, acted as a beacon for the Burning Legion, luring them back to Azeroth. Demons slipped through the gaps in reality, terrorizing the locals until the ruling Magocrats were forced to turn to the elves for aid. High elf wizards quickly realized what had happened and warned that humanity would have to give up magic to subdue the threat completely. The Magocrats, unwilling to sacrifice their power, instead proposed selecting a mortal champion to protect them from the Legion. This Guardian would have access to all their might, and would form a secret defense for the world. The elves agreed and, through the newly formed Order of Tirisfal, provided guidance in the selection. At the same time, the Magocrats sent some of their number to research and catalog all human magic. These wizards became the Kirin Tor.

The Kirin Tor became the city’s ruling power. Dalaran, though not a large city, was a beautiful place of towering spires and glittering streets, and the people there were happy and well protected. The Kirin Tor’s headquarters was the Violet Citadel, an impressive building so named for its stone walls which gave off a faint violet light. The building had many libraries, research chambers, testing rooms, classrooms, meeting alcoves, and bedrooms.