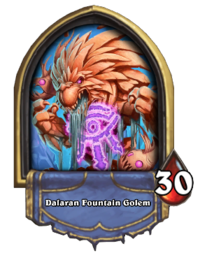 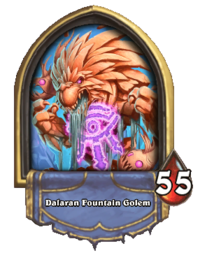 Dalaran Fountain Golem is a boss that can be encountered in The Dalaran Heist.

These decks correspond only to level 6 in chapter 5. If this boss is encountered on levels 4-5 in chapters 1-4, his deck will be missing 5 random cards.

The Dalaran Fountain Golem is connected to the famous Dalaran fountain, a wishing well located in the city's Eventide district. Notably, players can fish from the fountain in both the Wrath of the Lich King and Legion versions of Dalaran, with a chance to fish up a wide variety of lucky coins thrown into the well by some of Azeroth's most famous figures, such as Arthas Menethil, Fandral Staghelm, Jaina Proudmoore, Kel'Thuzad, Maiev Shadowsong, Medivh, and Sylvanas Windrunner. The coins all feature flavor text apparently reflecting the wishes made by the coins' owners when they first tossed them into the fountain.

Visually, Walking Fountain partially resembles a lion seal, apparently due to the lion seal statue that adorns the Dalaran fountain. It also seems to be accompanied by the small statues of frenzies, a type of carnivorous fish.