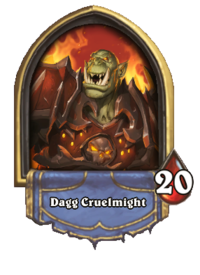 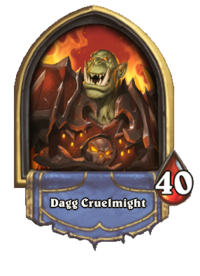 You never kick a man when he's down. Unless you're Dagg.

Dagg Cruelmight is a boss that can be encountered in The Dalaran Heist.

Dagg has a lot of removals and will use it to the best of his ability. Try keeping the board empty until you can drop more than one minion a turn.

Dagg Cruelmight
You are not long for this world.

Captain Eudora
What are ya gonna do, kill me with corniness?
Squeamlish
You is stopping being so rude now!
Mr. Chu
And you are nothing more than a common bully.

Dagg Cruelmight
You know it's nice to have someone to talk to.

Dagg Cruelmight
Be crushed beneath my might!
I will flatten you beneath my boots.
I'm angry because of low self ESTEEM!
I'm jealous that your minions are BETTER!
I'm just projecting my issues onto YOU!
The strong trample the weak!
Tremble and BREAK!
Worthless! Pathetic!
You will be forgotten!
You'll never amount to anything!

Dagg Cruelmight
I feel like my insults have been lacking lately...
Oh I had a great one lined up this morning...
What do I yell at next...

I-I'm not compensating for anything...

Yeah! Get 'em! They were weak anyways!

Dagg Cruelmight is original to Hearthstone.