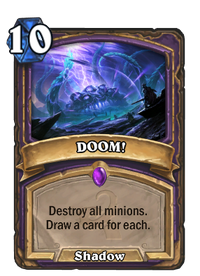 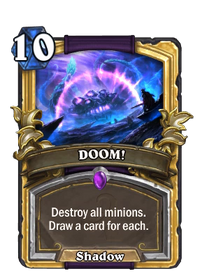 Destroy all minions. Draw a card for each.

We ran out of space for "DOOOOOOOOOOOM!!!!!"

DOOM! is an epic warlock spell card, from the Whispers of the Old Gods set.

DOOM! can be obtained through Whispers of the Old Gods card packs, or through crafting.

DOOM! is very similar to Twisting Nether, but has a higher mana cost and has the added effect of drawing cards. This added effect can be a mixed blessing. When you are low on cards, DOOM! is better than Twisting Nether because it clears the board and refills your hand. But if you already have a lot of cards, playing DOOM! can result in overdraw and sped up fatigue. Since warlocks don't need that much card draw, due to their Hero Power Life Tap, DOOM! is generally considered worse than Twisting Nether.

This card could be used as a second Twisting Nether in a Reno deck, if necessary.

Doom is the name of a warlock spell from World of Warcraft, previously known as "Bane of Doom". However, this spell's effect does not appear to have any connection to that one, and the specific form "DOOM!" is original to Hearthstone. This card can symbolize the deadly consequences should Yogg-Saron ever be freed from his prison. Given that the artwork shows the Old God freed and rising from the surface, causing a large maelstrom in the background, as well as the title of the card, it is safe to assume that should Yogg-Saron ever be freed from his prison, he will cause the doom of Azeroth. 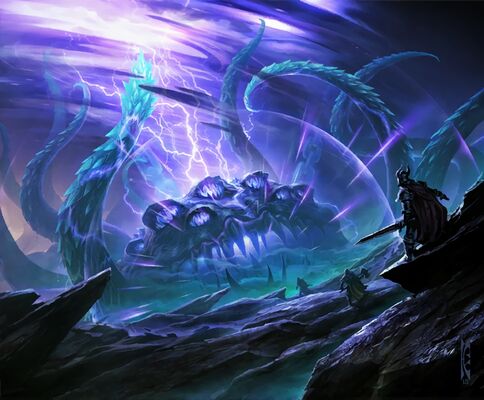