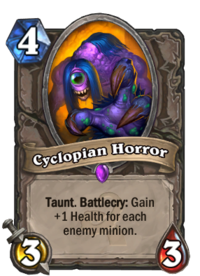 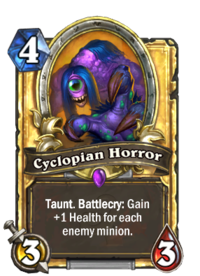 What are the qualifications for being a 'Horror?' Just how horrible do you have to be?

Cyclopian Horror is an epic neutral minion card, from the Whispers of the Old Gods set.

Cyclopian Horror can be obtained through Whispers of the Old Gods card packs, or through crafting.

Works very well against Zoo-decks and other decks that usually have a lot of minions. In most cases, your opponent will have at least 2 minions, making this card better than Sen'jin Shieldmasta.

This card is extremely useful in decks like Handlock, which in general run Brann Bronzebeard and other Taunt and Battlecry minions like Defender of Argus and Twilight Drake.

While not named as such, this is clearly one of the mistlurkers, mysterious predatory creatures who dwell in the mists surrounding the continent of Pandaria. As Pandaria's mists were partially created by the Sha of Pride, a spawn of the Old God Y'Shaarj, this may explain the Cyclopian Horror's emergence in response to the whispers of the Old Gods.

The mistlurkers are primitive peaceful creatures living in the Lower and Upper Sumprushes of Townlong Steppes. At some point the yaungol shamans, who used special torches to communicate with them, started working alongside them. However, recently the mist-shamans started using those same torches to control and kill the mistlurkers that refused their orders. Most of them do not speak the languages spoken by humans or orcs, however a few like Orbiss have learned to speak it.

The mist helps sustain their bodies. Mist that is warm and fragrant, like the mist in the Upper Sumprushes, is nutritive to them. They also ingest plants and plant-like creatures, like the nature spirits and drink the blood of creatures they can capture.