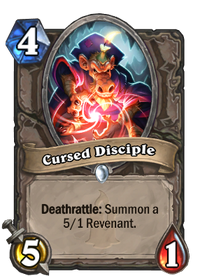 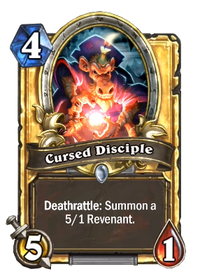 Politer than his brother, the cursing disciple, but far more evil.

Cursed Disciple is a common neutral minion card, from the Kobolds & Catacombs set.

Cursed Disciple can be obtained through Kobolds & Catacombs card packs, or through crafting. 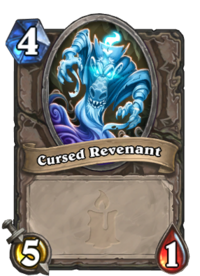 Cursed Disciple is functionally very similar to a Magma Rager with a Divine Shield, as two instances of any amount of damage are needed to kill it. This makes it comparable to Scarlet Crusader, having 2 more attack for 1 more mana. It's best used in a Jungle Giants deck to complete the quest faster, or it can be comboed with Steward of Darkshire. Outside of these limited uses, it's a reasonable minion to pick in Arena.

Summon
Dark one snuffs all!