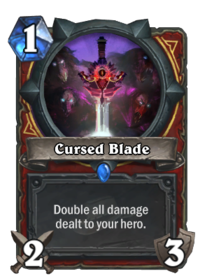 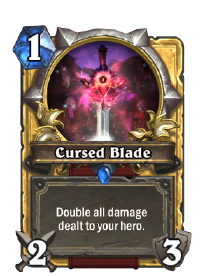 Double all damage dealt to your hero.

The Curse is that you have to listen to "MMMBop" on repeat.

Cursed Blade is a rare warrior weapon card, from the League of Explorers set.

Two copies of regular Cursed Blade are obtained by defeating The Steel Sentinel, the second boss in The League of Explorers's fourth wing, the Hall of Explorers.

As a Wild format card, both regular and golden versions of Cursed Blade can also be crafted for the following amounts:

Cursed Blade is best played in an aggressive Warrior deck with little regard for its own life total. Even though the weapon has excellent stats for only 1 mana, its drawback is widely considered the worst in the entire game. Cards like Malkorok and Blingtron 3000 almost always cause devastating consequences to players unlucky enough to receive this weapon. It should also be noted that this weapon's 3 Durability causes the drawback to be doubly painful, as it will take the user 3 turns to get rid of Cursed Blade.

This weapon should be used for removal only with great caution. Even the cheapest minions will do large amounts of damage to you.

It is best to use this card during the beginning of the game or as soon as possible since the card's cost is 1 mana, and your opponent will not have as many powerful minions on the board yet. 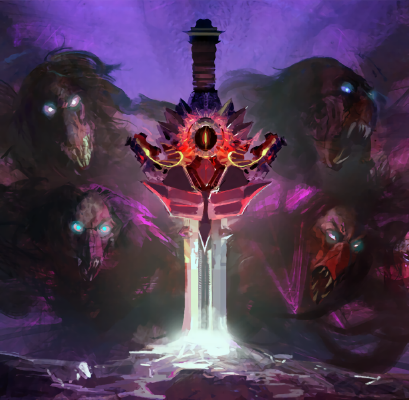