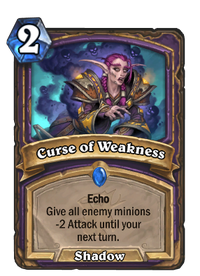 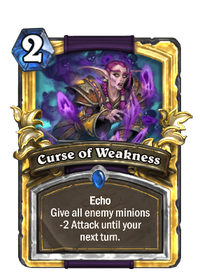 Echo
Give all enemy minions -2 Attack until your next turn.

Warlocks refer to this as a "balance change."

Curse of Weakness is a rare warlock spell card, from the The Witchwood set.

Curse of Weakness can be obtained through The Witchwood card packs, or through crafting.

A great card to stall off enemy attackers or reduce their attack power especially with decks that uses alot of minions such as Zoo Warlock or Murloc Paladin that tries to rush you down early in the game.

This can be used multiple times being able to effectively reduce enemies attack by 10 for their turn.

You can synergize with Void Ripper to effectively destroy all of the enemy minions that has 0 attack or Mossy Horror with 2 or less attack.

In World of Warcraft, Curse of Weakness is a warlock honor talent that reduces the physical damage dealt by a target enemy for 10 seconds.