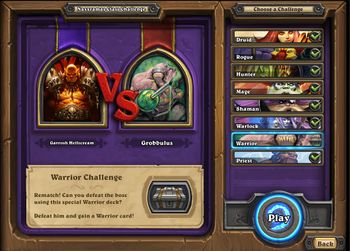 Curse of Naxxramas features nine class-specific Class Challenges, with each offering a new and more difficult twist on the adventure's encounters, tailored to that class.

Class Challenges use predetermined decks, which are not directly revealed to the player at any point. Class Challenge decks feature 30 cards in total, but like Arena decks are not subject to the 2-copies-per-card limit found in constructed play.

Completing each Class Challenge will reward the player with two copies of a new class-specific card for that class. Each Class Challenge features the related card, as well as often including other cards from Curse of Naxxramas, some of which, at the time of the Challenge's release, were not yet available for players to collect.

Class Challenge decks usually have specific themes, and often serve to specifically demonstrate how the related card can be used to great effect, such as by including several other cards with which the card has good synergy. This synergy often extends to the hero powers and cards used by the Challenge's boss.

Class Challenges do not have Heroic mode versions.

Class Challenges are not immediately available, but must be unlocked through completing the corresponding wing of the adventure.

The deck features Nerubian Egg, and provides several means of ensuring the minion's destruction, triggering its Deathrattle. Defender of Argus, Mark of the Wild and Mark of Nature can be used to grant the Egg Taunt, forcing the opponent to remove it; while Poison Seeds (as well as Naturalize) offer means of directly destroying it.

Aside from Nerubian Egg synergy, the deck is notable for featuring large amounts of Taunt (including Hogger), a decent amount of removal (including Poison Seeds) and Stoneskin Gargoyle x 5.

The Anub'ar Ambusher's return effect sets the tone for the deck, with almost every minion in the deck featuring a Battlecry or Combo effect. This matches the boss Maexxna perfectly, whose hero power returns minions to the player's hand.

The deck also features several minions whose Battlecries summon additional minions, such as Echoing Ooze, Murloc Tidehunter and Razorfen Hunter, allowing the rogue to keep something on the board even if the original minion is returned to their hand.

Other notable cards include Alexstrasza, and the Loatheb minion, otherwise unavailable to players at the time of this Class Challenge's release.

The deck is composed only of Webspinners. However, through the Webspinner's Deathrattle the player may obtain any collectible Beast in the game. The Challenge deck's composition is therefore heavily dependent on RNG.

The mage Class Challenge sees the player battling Heigan the Unclean in order to obtain Duplicate.

This deck is a heavy deathrattle and secret deck, which allows for great synergy with Ethereal Arcanist or the Undertaker.

At the time of its release, the deck was notable for including Mad Scientist, a card that was not yet available for players to obtain.

The shaman Class Challenge sees the player battling Gothik the Harvester in order to obtain Reincarnate.

Players might employ a variety of tactics to use Gothik's strengths against him. Rockbiter Weapon and Flametongue Totem enable the Spectral ghosts to suicide against Unstable Ghouls, Abominations, and Spectral Knights. At the same time, Nerubian Eggs, Haunted Creepers, and Cairne Bloodhoof clog your side so that additional Spectrals cannot be added.

Other notable cards include Feugen and Stalagg, otherwise unavailable to players at the time of this Class Challenge's release.

The warlock Class Challenge sees the player battling The Four Horsemen in order to obtain Voidcaller.

Success may hinge on a lucky 'Voidcaller chain', where the Baron exhausts most of his early game removal to destroy Voidcaller after Voidcaller in one turn. If this can be accomplished, then the player might also be able to summon a timely Felguard for the opposing team to suicide against. This is the best case scenario, since neither Redemption nor Avenge will trigger on the Baron's turn.

Once the Baron's remaining health is less than equal to the power of your taunts, his Runeblade is near-useless. He may only resume his attacks when the taunts are cleared, or one of the two Drain Lifes in his deck is drawn.

Also, when all seems lost and you draw Lord Jaraxxus it makes for swift game change.

Divine Spirit can be used to create a very large Lightspawn (or a different minion when combined with Inner Fire). Inner Fire alone combines well with Deathlord or Maexxna to give an 8/8 minion.

The paladin deck presents great opportunity for reproducing buffs, thanks to Echoing Ooze. Blessing of Kings, Sword of Justice, and Blessing of Wisdom are the major buffs, and can be easily reproduced by comboing them with an Ooze. Kel'Thuzad's two-phase behaviour makes it worth establishing a strong board before removing his last point of Armor. His behaviour is generally very similar to that of his regular encounter (normal mode).