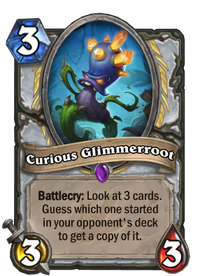 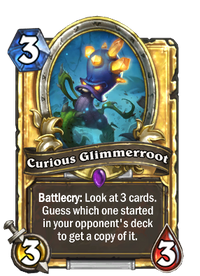 Battlecry: Look at 3 cards.
Guess which one started in your opponent's deck to get a copy of it.

George promised to be good. But it's easy for little Glimmerroots to forget.

Curious Glimmerroot is an epic priest minion card, from the Journey to Un'Goro set.

Curious Glimmerroot can be obtained through Journey to Un'Goro card packs, or through crafting.

This card requires knowledge and possibly some luck to make use of. Using this card requires the player to know the current meta in order to determine what card your opponent is most likely to put in their deck. Because of this, this card can be "soft-countered" by non-traditional deck building, as using unusual cards like Renounce Darkness, or Shatter can throw a player off.

Because Curious Glimmerroot prioritizes class cards, the combination of both the 3/3 body and the card received is generally of greater value than what is received through Thoughtsteal. This prioritization of class cards also makes choosing the correct card considerably more reliable than what the card texts would suggest as most of the unpredictable cards in common decks (such as tech cards) are neutral.

Cards which synergize with Curious Glimmerroot are those that have the ability to reveal cards in the opponent's deck, such as Thoughtsteal, Drakonid Operative, Crystalline Oracle, Shifting Shade, and cards with Joust.

When you pick the "wrong" card, even though you do not gain a card, you do gain knowledge of your opponent's deck: you now know for sure one card that is, and two cards that are not in their deck.

Glimmerroot is original to Hearthstone, as both a herb and sentient plant.