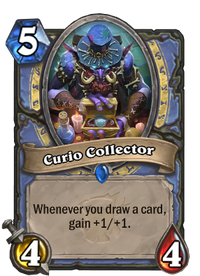 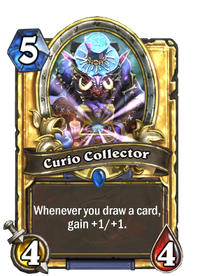 Experts worry that curios are a gateway to face-collecting.

Curio Collector is a rare mage minion card, from the The Witchwood set.

Curio Collector can be obtained through The Witchwood card packs, or through crafting.

This card is comparable to Daring Reporter, but based on your own draws and for Mages only. It is far easier to draw cards for yourself than for your opponent, so you can have more consistency. However, it is considerably worse on its own since your opponent can have time to react to it before it can benefit from its effect.

Curio Collector works well in a deck dependent on extreme draw mechanics, which historically has been an indicator of Tempo Mage decks, using Aluneth, Arcane Intellect, and Book of Specters. This card can be an effective late-game finisher for this archetype.

Summon
Mere baubles, but I take.
Attack
Hand it over!