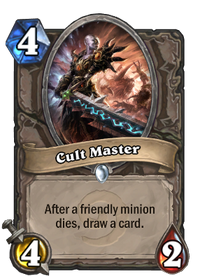 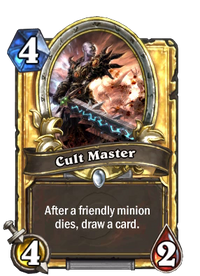 Whenever one of your other minions dies, draw a card.

She may be an evil cult master, but she still calls her parents once a week.

Cult Master is a common neutral minion card, from the Classic set.

Cult Master can be obtained through Classic card packs, through crafting, or as an Arena reward.

Cult Master is a good card to get draw power. You can use it in decks that have low life minions, like Leper Gnome or Murlocs, and/or Taunt minions. When fighting against a Cult Master, try to prioritize killing her to prevent the enemy from drawing cards.

Summon
Join, or die! Or both.
Attack
Mwahaha, who's next?!
Death
Aaaaaaa, death again!