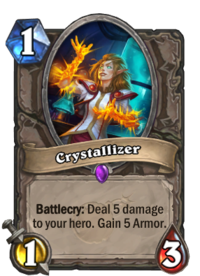 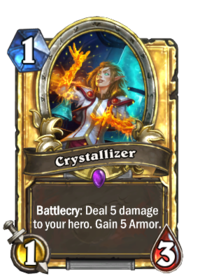 This elf's winning the arms race.

Crystallizer is a epic neutral minion card, from The Boomsday Project set.

Crystallizer's Battlecry is useful for activating effects that benefit from the player's hero taking damage, such as Battle Rage, Mortal Strike, Hooked Reaver, Nethersoul Buster, and, in Wild format, Floating Watcher. It also has significant synergy with cards that benefit from the player's Armor, such as Bladed Gauntlet, Shield Slam, Geosculptor Yip, and Ironwood Golem. It can also be used as a way to damage your hero in order to use healing effects like Lesser Pearl Spellstone and Crystal Stag, or just in combination with healing to nullify the downside. Outside of these cases, as a 1-mana 1/3 it's a solid minion for aggro decks.

It can be used with Time Out! or Violet Illusionist to generate 5 Armor.