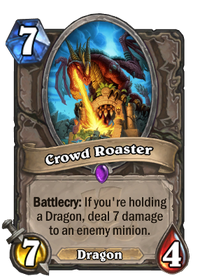 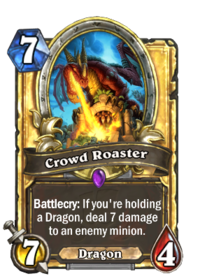 Battlecry: If you're holding a Dragon, deal 7 damage to an enemy minion.

Every major show has an opening act to warm up the crowd.

Crowd Roaster is an epic neutral minion card, from the Rastakhan's Rumble set.

Crowd Roaster can be obtained through Rastakhan's Rumble card packs, or through crafting.

Crowd Roaster is a solid late game card to clear out any big minions your opponent may have. Ideally, you would want to use its battlecry on minions with elusive effects, but its usually used to cut down late game minions . Crowd Roaster does have its flaws as its 7 mana cost defines your turn, and its health is quite low sitting at 4. Nonetheless, it still has presence on the board if it manages to survive the next turn.