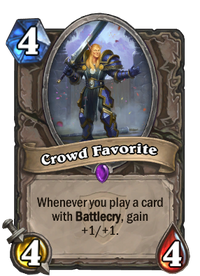 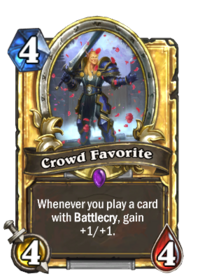 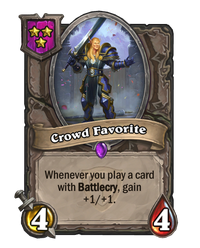 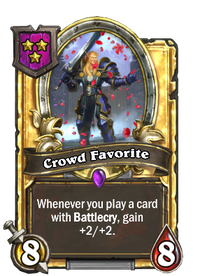 Whenever you play a card with Battlecry, gain +1/+1.

Crowd Favorite is an epic neutral minion card, from the Grand Tournament set.

Crowd Favorite can be obtained through The Grand Tournament card packs, or through crafting.

Crowd Favorite is a potentially strong card thanks to its ability to gain stats relatively quickly, since Battlecry minions are very common in most decks. Its stats are only slightly lower than the vanilla 4-drop Chillwind Yeti, meaning that immediate activation is not always required. If it sticks around, it can potentially reach much higher stat totals.

Summon
Ahh. So many viewers.
Attack
I have lethal!

"Speaking of the roar of the crowd, there’s nothing quite like the feeling of having a throng of adoring fans at your back. No one proves that better than the Crowd Favorite; each approving shout urges him to greater heights of valor!"[3]

When this card's effect triggers while playing on the battlefield for The Grand Tournament, the spectators will cheer.