From Hearthstone Wiki
(Redirected from Craftable)
Jump to: navigation, search 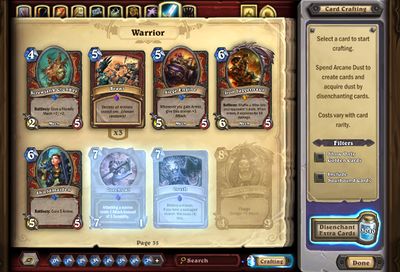 The crafting system is an element of Hearthstone that allows players to directly create new cards. It can be accessed through the My Collection screen.

Crafting consumes Arcane Dust to produce new cards, while disenchanting allows players to destroy unwanted cards, granting a quantity of Arcane Dust in exchange. Crafting is the quickest and most direct way of obtaining a specific card, provided you have sufficient Dust.

Disenchanting a card is often referred to as dusting the card, since the card is effectively converted into Dust.

The rules for cards from adventures (e.g., Blackrock Mountain, The League of Explorers) are a little more complex:

Each card has fixed crafting and disenchanting costs, based on rarity and regular/golden status. Other factors, such as card set, do not affect cost.

Note that the disenchanting values for golden cards match exactly the crafting cost for regular cards of the same rarity (Common is the exception, giving 10 extra Arcane Dust). This allows players to exchange any golden card for a regular card of the same rarity. For players who are not concerned with golden cards, this essentially makes goldens obtained from sources such as card packs "wild cards", which can then be converted into a replacement of their choice. 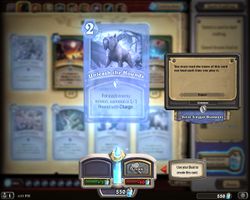 Since players can only have 2 of any card in a deck (and only 1 of each legendary card), disenchanting triplicate cards above this limit may be considered to have no true cost to the player. The 'Mass Disenchant' option allows players to automatically disenchant all triplicate cards in their collection with one click.

The only limitation to crafting lies in the required amount of Arcane Dust. While it is not possible to purchase Dust directly, all cards obtained through card packs can be disenchanted. Dust can also be obtained as a reward in the Arena, from the Ranked Chest at the end of each season, and as a reward given to players who own Classic cards which were moved to the Hall of Fame. The player's current supply of Arcane Dust can be viewed in the My Collection screen. There is no cap to the amount of Arcane Dust a player may accumulate.[1]

Players can craft and disenchant cards through the Collection. Any card on display can be clicked to view its crafting and disenchanting costs. If the player has sufficient Dust, they can click on the Create button to craft it. Similarly, if the player has at least one copy of a card, they can click on the Disenchant button to disenchant it. If disenchanting a card would leave the player with fewer copies of that card (regular and golden combined) than they could use in a deck, the player will be warned before proceeding with the disenchantment. When crafted, minion cards will play their summon quote.

Players can undo crafting and disenchanting immediately afterwards for the full Arcane Dust values in case of accidental actions. This option disappears after closing the screen.

Note that players are not able to craft excess copies: If you already have 2 copies of a card (1 copy of a legendary card) you will be unable to craft additional copies. This limit applies separately to the golden and non-golden versions of each card.

Players are warned when disenchanting any usable card

Clicking the Crafting button will take the player into crafting mode. This adds some useful extra display options, as well as providing access to the Mass Disenchant interface. Crafting mode is not only necessary to craft and disenchant cards already in the player's collection, but allows the player to view and select cards they have not yet collected, including both golden and regular versions.

Unlike the regular collection view, which displays only cards the player has already collected, crafting mode displays all cards matching the current search parameters. Cards which have not yet been collected are shown faded out, with a special highlight for those uncollected cards which the player has sufficient Dust to craft.

Crafting mode features two special filters in addition to the standard options. The first shows only golden cards, providing the only means of crafting golden cards the player does not already own. The second shows only uncraftable cards, which oddly is of no relevance to either crafting or disenchanting, but does allow players to inspect any uncraftable cards missing from their collections, including upcoming cards which have been added to the game data but are not yet available in-game. 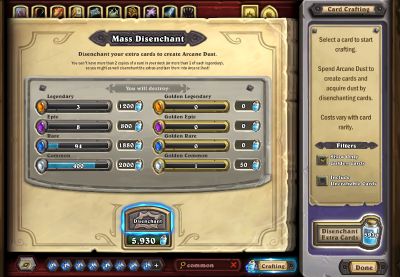 While in crafting mode, a large Arcane Dust icon on the bottom right will display the amount of Dust which would be gained by disenchanting all 'triplicate' or 'extra' cards - those of which the player already has the maximum playable number of copies (1 for legendaries, 2 for all other cards).

Note that golden and regular cards are considered separate when marking cards as triplicates. For example, a player can have 2 regular copies and 2 golden copies of any non-legendary card without the Mass Disenchant system considering any to be triplicates. This is useful in preventing golden cards from being disenchanted automatically, since players may wish to preserve either golden or regular versions of cards, or both. To specifically disenchant golden or regular versions of a given card (such as disenchanting a golden copy of a card the player already has 2 regular copies of), the player must use the normal disenchanting process. The interface itself only shows the breakdown of triplicate golden cards once the player has at least one triplicate golden card.

Every so often a patch will feature card changes, altering a card's text or attributes. If the card is craftable, and the change is not a direct upgrade or simple technical adjustment, that card will then be made disenchantable for its full crafting cost, for a short period, usually two weeks. This is designed to allow players who have spent dust crafting the card to disenchant it at no cost, minimizing the disruption caused by such changes to existing cards. After the adjustment period ends, the card's disenchanting reward will be restored to its usual amount.[2] When a standard card is moved into the Hall of Fame, players automatically receive the full value of the card in arcane dust, and there will be no period where the card could be disenchanted at full value. For more information, see Hall of Fame#Dust Refunds 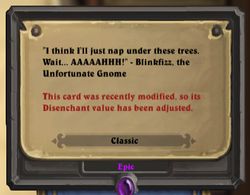 To inform players that a card has been nerfed and its disenchant value has been modified, text will be temporarily present in the bio

This adjustment is put into effect through increasing the normal disenchanting value for the changed cards. Because of this, the extra Dust is provided whether the card was crafted before the card was changed, or afterwards.[3] As a result, players are able to craft and later disenchant these cards (within that period) without penalty, allowing them to try the cards in their decks before deciding whether to keep or disenchant them. However, since almost all eligible card changes are nerfs, this is generally less desirable than might be expected.

The increase means a regular changed card can be converted to any other card of the same rarity, at no cost. It also means that a golden changed card can be exchanged for several cards of the same rarity or even higher rarity. For players more interested in completing their regular collection than collecting golden cards, but not wishing to lose the card altogether, this means they can convert a golden changed card into a regular copy of the same card, as well as regular copies of several other cards. This makes card changes a particularly lucrative time for players who have gained golden copies of the changed cards through rewards such as the Highest Rank Bonus chest, provided they are not too attached to the golden quality.

Hearthstone's crafting system was specifically designed as an alternative to the card trading that occurs with most collectible card games. There are currently no plans to introduce card trading. As explained in official blog Hearthstone Crafting: In Dust We Trust:

Why can’t I just trade my cards with my friends to get the cards I want?

"Many card games out there are considered “Trading Card Games,” or TCGs. While there are perks to being able to trade your cards, there are negatives to card games that support trading, even in a digital world. What do you as a player want out of trading cards? Generally, the answer is “To get the cards I want and trade away the cards I don’t!"

What happens when the cards you have are the “wrong” cards—cards other players simply don’t want? What about when everyone wants the same cards?

When a player opens a pack of cards in a typical TCG, they’ll generally find a fixed number of cards of various rarities. Cards of the most numerous rarity in any given pack, or “common” cards, end up having little to no value. Everyone has them and no one wants them.

What about the rare cards? These “more valuable” cards can vary wildly from “MUST HAVE!” to “meh” and anywhere in between. In a trading system, the unimpressive rares end up being only slightly more valuable than common cards, even if they aren’t nearly as common. It’s very common for a dozen or so rare cards from any given set to contain most of the value and the rest are worth very little. People demand those high-end cards, and their value skyrockets. Can’t afford to buy all of the good rares? You better hope you’re lucky when you open your next pack.

So in a trading-based card game, you may finally manage to get a card that is “worth” something . . . but then you want to keep that card and not trade it away. So your only option is to purchase more packs until you get something worth trading, even if you may not actually want to part with it. That’s not particularly fun. On top of that, you may even feel like you can’t play the game competitively without that specific card! It’s very frustrating, and new players are reluctant to become invested in a card game if they can’t manage to get those cards—in trade or for cash.

Crafting allows you to get the cards you’re actually looking for without having to wait for random luck to shine your way, with no need to look for people that have a particular card you want to round out your deck.

Hearthstone allows you to disenchant your [Classic] cards into Arcane Dust, and you then use the Arcane Dust to create the cards you want, instantly! It’s fast, it’s easy, and you don’t have to reference how valuable your card is on a secondary market each time [you] want to make a choice to trade it off or not.