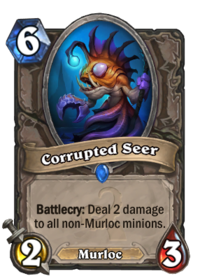 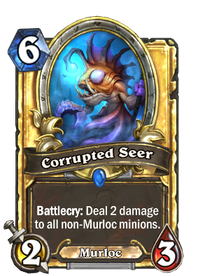 For seers, it's very handy to have your crystal ball hanging right in front of your face.

Corrupted Seer is a rare neutral minion card, from the Whispers of the Old Gods set.

Corrupted Seer can be obtained through Whispers of the Old Gods card packs, or through crafting.

This minion seems weak for its cost, but has a powerful Battlecry capable of clearing the opponent's board. However, its Battlecry can also damage friendly non-Murloc minions, making it best-suited to Murloc decks with few other minions. If necessary, the player can trade any friendly non-Murlocs in order to soften up the opponent's board before summoning the Corrupted Seer.

This card is one of a number of board-wide Murloc-synergy cards which alter in value dramatically if the opponent is also playing a Murloc deck. In this case the Battlecry is likely to be of little use, meaning the minion will probably be played for its relatively large if expensive 2/3 body, which still makes a decent recipient for effects like Murloc Warleader.

This card is very valuable in Arena where AoE effects are rare.

This is the corrupted version of Coldlight Seer. 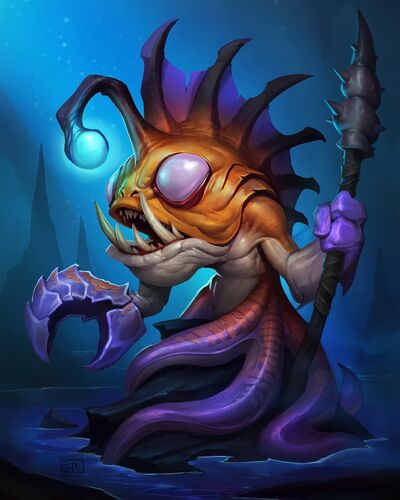