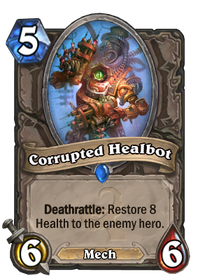 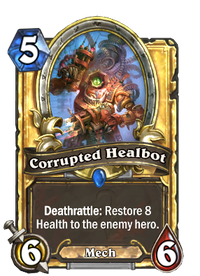 Not so much "corrupted" as "has terrible aim".

Corrupted Healbot is a rare neutral minion card, from the Whispers of the Old Gods set.

Corrupted Healbot can be obtained through Whispers of the Old Gods card packs, or through crafting.

This card has clear synergy with Auchenai Soulpriest, turning its highly undesirable Deathrattle into a devastating source of damage. The likelihood of this play makes the Corrupted Healbot a priority for the opponent to remove, before an Auchenai Soulpriest can be played. If a Soulpriest is already in play, this should always be removed or countered first, to prevent the Deathrattle combo.

While its relatively high Health increases the chances of it surviving for a Soulpriest combo, it can also make it hard to deliberately trade and suicide against an opponents minions, or sacrifice with your own AoEs (Soulpriest + Circle of Healing or Excavated Evil).

Without Auchenai Soulpriest this minion's Deathrattle can still be negated due to the opponent being at full Health (most likely during the early game), but there are far better options for the same cost, making it a poor pick with a high chance of backfiring. Compare and contrast Pit Fighter, a minion with the same mana-cost and with no negative Deathrattle effects, but with 1 less Attack.

However, Corrupted Healbot can shine in a deck built around N'Zoth, the Corruptor. Even with its negative Deathrattle, re-summoning the Healbot via N'Zoth provides a substantially strong minion to help secure the board. It's also a rather valuable minion in Arena for its raw stats.

Summon
(distorted) Back from the junk heap.

This is the corrupted version of Antique Healbot. 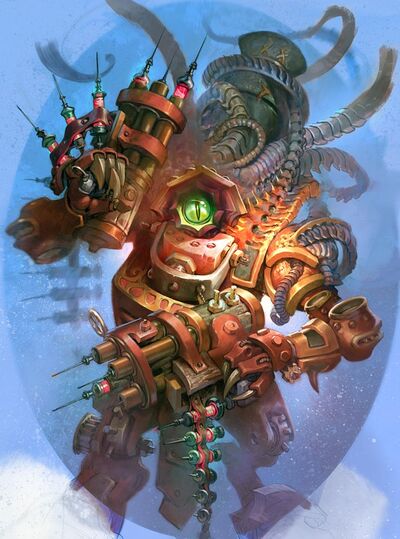