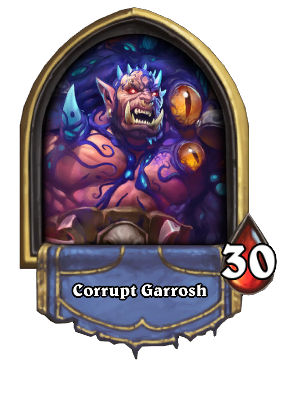 Corrupt Garrosh is an alternate hero for the

Warrior class. It is obtained by winning 1,000 Ranked or Arena games as warrior.

This portrait depicts Garrosh Hellscream as he appeared during the Siege of Orgrimmar, after absorbing the power of Y'Shaarj.

After the goblin excavation team in the Vale of Eternal Blossoms discovered the sealed heart of a deceased Old God, Y'Shaarj, Garrosh traveled to observe his secured bounty. Realizing the heart was dormant, Garrosh fought his way through the Shado-Pan to submerge the heart in the vale's pools. He was confronted by the Shado Pan's lord, Taran Zhu, who attempted to end Garrosh's rampage across the continent, but was defeated when the warchief choked him with dismantled rails and impaled him upon Gorehowl.

Garrosh moved the heart into his own personal sanctum within the Underhold. With the entire city of Orgrimmar under martial law, Garrosh issues commands from within the compound and planned to conquer the entire world for his True Horde using his newfound powers. He has also allowed the Paragons of the Klaxxi within his compound, who acted as guardians of the Heart. Garrosh also gifted some of its power to Malkorok. The Alliance and Horde formed a coalition to stop the crazed dictator, along with adventurers freshly arrived from containing the destruction Garrosh had laid upon the Vale of Eternal Blossoms. The group laid siege to the city and successfully made their way into the Underhold and fought past all Garrosh's traps and lieutenants to find Thrall confronting Garrosh and pleading him to cease his genocidal war.

Garrosh refused to co-operate, calling Thrall weak and sadistically stating he'll take pleasure in destroying everything the Horde and Alliance had created. He even briefly tortured his old mentor physically, as his Dark Shaman had tortured the elements for miles around, thus causing them to strike out at Thrall when he attempted to call upon them. Thrall overcame this and faced Garrosh in melee combat, only to be easily beaten. Garrosh then turned his attention to the adventurers and engaged them in battle with the support of the True Horde, the iron stars, and the power of Y'Shaarj itself.

The battle took place not just in the Underhold, but also in Y'Shaarj's twisted pocket dimension, shaped to resemble places where immense Sha outbreaks had occurred on Pandaria. The adventurers held out, however, and in a last-ditch effort Garrosh became an avatar of the Old God by absorbing all the Heart's remaining power. But it still wasn't enough, and the evil Warchief, at last, collapsed from his wounds, the power of Y'Shaarj dissipating from his exhausted body, after which the Alliance, Horde and Pandaren leaders arrive to take him into custody and decide his fate.

When viewed in the collection, Corrupt Garrosh has the following flavor text:

When someone asks you if you want to be an old god, say no. Obtained from winning 1,000 Ranked or Arena games as a warrior.

All 1,000 Win heroes use the same emotes as the basic hero. For a list, see Garrosh Hellscream#Emotes.