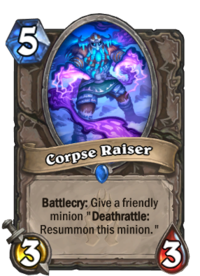 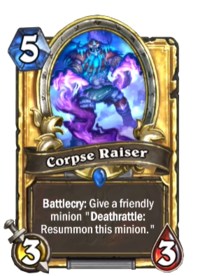 Battlecry: Give a friendly minion "Deathrattle: Resummon this minion."

He was just minding his business, farming corpses, when you meddling adventurers came along.

Corpse Raiser is a rare neutral minion card, from the Knights of the Frozen Throne set.

Corpse Raiser can be obtained through Knights of the Frozen Throne card packs, or through crafting.

Corpse Raiser can sometimes represent incredible value with its Battlecry effect, which was previously exclusive to Shamans with the card Ancestral Spirit. Having neutral access to this effect opens up the possibility for new combos in other classes. Corpse Raiser is however a niche card: while its effect can be very powerful in a deck that can utilize it to its fullest, its 3/3 for 5 mana statline causes it to be a very weak minion to play when you are not getting maximum value out of its effect.

Summon
The grave buys you no rest!
Attack
Awaken!

Corpse Raiser is a Frost vrykul.

Frost vrykul are a variant of vrykul. They look like vrykul, except their skin is blue and layered with frost. Frost vrykul may be a race, but they are not unified, and may not even be related.