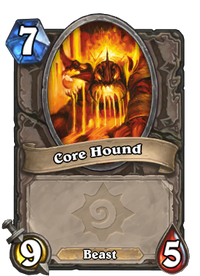 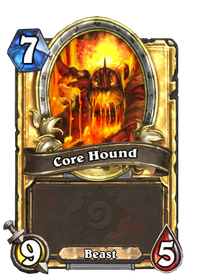 You don’t tame a Core Hound. You just train it to eat someone else before it eats you.

Core Hound is a neutral minion card, from the Basic set.

Two copies of Core Hound are automatically included in all players' collections upon unlocking the hunter class.

Two Golden copies of Core Hound are a reward for raising a hunter to levels 51 and 52.

Core Hound is uncraftable and cannot be crafted or disenchanted.

In the current game, Core Hound is generally considered a poor card. It is usually only usable late in a game because of its high mana cost, and while a Taunt minion might help it survive, by the time both players have 7 mana, the opponent will likely have access to removal spells that will cheaply remove the threat. Its high Attack does however makes it a good target for effects like Windfury.

As a Beast, Core Hound has synergy with hunter Beast-synergy cards such as Houndmaster, which can turn this already threatening card into a monstrous Taunt, and Tundra Rhino, which if previously summoned can allow a 9 damage charging minion from the Core Hound to swing a game.

Likewise, the warrior spell Charge can be used with Core Hound on turn 8 for a powerful damage burst, though it can only target minions.

Captured Jormungar is a Core Hound with its stats reversed. Being also a Beast, it may be a better choice for a Beast-themed deck than the Core Hound, unless you are looking for a very powerful minion to go for the face and not for one that is going to stay on the board for a while and provide Beast-synergy for various cards, like Kill Command.

A core hound is a giant elemental beast, with the appearance of a massive bulldog with two heads, each equipped with a mouth filled with rows of flaming teeth. Its body is covered with armored hide and studded with bony spikes. A streak of flames runs down its spine from head to stubby tail. The oldest and most powerful of the core hounds is Magmadar, the alpha male and sire of the entire current pack, and every core hound can trace their lineage back to Magmadar.

Core hounds originate from the Firelands of the Elemental Plane. However, they have also lived alongside their master Ragnaros in the Molten Core, and more recently attempted to invade Mount Hyjal.

It turns out that elemental lords are fond of keeping pets. Unfortunately, when a magma giant thinks “cuddly,” he checks off a list that includes things like “giant,” “two-headed,” “fang-mawed,” and “made of living magma.” The only beings dwelling in the elemental plane of fire who match that description are the terrifying core hounds. While keeping one of these critters probably makes apartment hunting a chore, there’s no better four-legged friend to have when your back is up against the wall.[1]