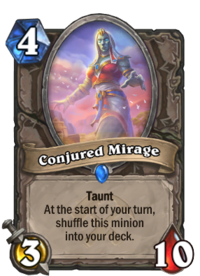 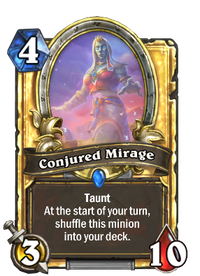 Taunt
At the start of your turn, shuffle this minion into your deck.

What you see is Isiset.

Conjured Mirage is a rare neutral minion card, from the Saviors of Uldum set.

This minion is an massive wall for such a low cost. It's comparable to Doomsayer in that it puts a halt on enemy aggression, but both provide advantages in a different way. On one hand, Conjured Mirage will distribute damage to the opponent if they choose to destroy it, while Doomsayer merely redirects some damage if the opponent can destroy it. On the other hand, Doomsayer is much more disruptive to the opponent's tempo since it prevents them from building their board on that turn, while opponents are free to continue building their board against Conjured Mirage.

The fact it shuffles itself into your deck at the start of each turn can be both an upside and downside. The upside is shuffling itself refreshes its use for later and it delays fatigue. The downside is that it can delay more crucial cards for being drawn, making it somewhat problematic in combo decks, despite being a good stalling card otherwise.

Overall, Conjured Mirage is a good defensive card for control decks for stalling until they can have enough mana to use their more powerful cards, particularly for ones that have medium to large board clears that could take care of minions the opponent built up while the Mirage kept them stalled.

Conjured Mirage could also be used in a Silence Priest deck for its huge base Health, making it a great Divine Spirit/Inner Fire target.

Summon
Bask in my radiance!
Attack
You are unworthy!

Conjured Mirage is a representation of Isiset, Construct of Magic, one of the four titanic watchers that protect the Halls of Origination in Uldum.

From the World of Warcraft Adventure Guide
Isiset serves to regulate the arcane energies contained within, and produced by, the Halls of Origination. Legend has it that this construct has become enraptured with her own arcane mastery and the perfection with which it seemingly endows her.

During her boss encounter, Isiset summons Mirror Images of herself, each representing one of her main abilities. Killing one of the images will prevent her from using the corresponding ability for the rest of the encounter.

In addition to referencing the lore of Isiset, the flavor text of Conjured Mirage is a play on the phrase "What you see is what you get".