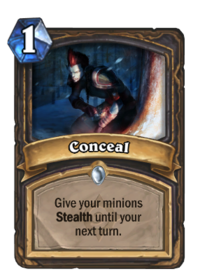 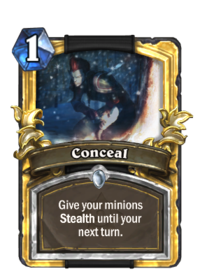 Give your minions Stealth until your next turn.

Rogues conceal everything but their emotions. You can't get 'em to shut up about feelings.

Conceal is a common rogue spell card, inducted into the Hall of Fame set, formerly from the Classic set.

Conceal can be obtained through crafting only.

Try dropping a strong passive effect minion on to the field before casting Conceal to get the most out of the card, such as a Spell Damage granting minion or Pint-Sized Summoner.

Conceal has great synergy with Doomsayer, together they make for a very cheap board wipe.

Conceal's Stealth effect is removed by attacking. This has two major consequences:

This card is named for the WoW rogue ability Shroud of Concealment, which is used to stealth nearby party members. 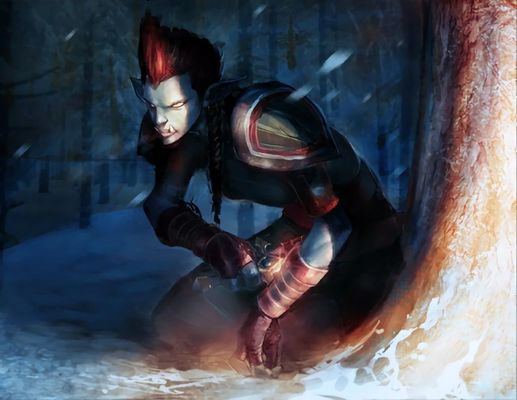 Commentary: Stealth is a very powerful mechanic, and can also be very frustrating to play against—more for some classes than others. Hearthstone should ultimately be a game of plays and counter plays, and Conceal makes it increasingly more difficult for other classes to interact with Rogue minions as time goes on. We considered promoting Gadgetzan Auctioneer to Wild instead, but in the end we decided to move Conceal because Auctioneer has proven to be one of the most skill testing cards in the game. We think the power level of Auctioneer decreases with this change, and games where Auctioneer is played will be a bit more interactive.