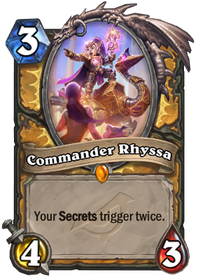 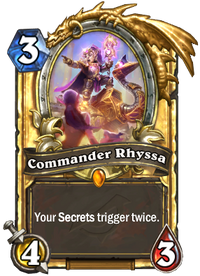 Two people can keep a secret as long as neither of them are Commander Rhyssa.

Commander Rhyssa is a legendary paladin minion card, from the Rise of Shadows set.

Commander Rhyssa can be obtained through Rise of Shadows card packs, through crafting, or as an Arena reward.

Commander Rhyssa needs to be alive during the secret trigger phase for effect to work(For example if you play Avenge and play Commander Rhyssa on your turn while you have Bone Drake on board and your opponent casts Hellfire which kills Rhyssa, the secret will trigger only once). Same for Redemption.[1]

Contrary to her description (and the game does not make it clear) some activations are meaningless and others can not be triggered twice.

Getaway Kodo can not be triggered twice for unknow reasons.

Meaningless Activation: Autodefense Matrix (the attacked target does not regain the Divine Shield), Sacred Trial (further summons are not affected), Oh My Yogg! (this one can be worse when triggered twice) Repentance.

All other Secrets works normaly when double or triple triggered (Rhyssa can be copied and her effect is persistent through all copies).

Commander Rhyssa is an excellent choice for any Paladin deck focused around Secrets. Her stats are above average for her cost, which means that she's a safe card to play even when no Secrets are in play. She can then be followed on curve with Bellringer Sentry or, failing that, numerous Secrets straight from your hand. Try your best to keep her alive as long as possible to make the most of her persistent effect.

Avenge has a powerful combination with Rhyssa, providing a double buff, possible creating a 10/7 minion on turn 4.

Noble Sacrifice can be combined with a Sword of Justice and summoning 2 3/2 minions, and further improved by Competitive Spirit or Avenge.

Redemption has a great synergy with Rhyssa. Redemption will create another copy when a card is destroyed.

Body Wrapper can fit really well when Rhyssa is in your deck. Silence is your worst enemy, and whe she is destroyed, Body Wrapper will provide another copy to use her another time.

Commander Rhyssa is unique to Hearthstone. She is the leader of the Dalaran City Guard.[2]

Rhyssa appears to be a gnome paladin, even sporting a unique mechanostrider mount. If this is the case, she is the first known example of a gnome paladin, which is not available as a playable race-class combination in World of Warcraft.