From Hearthstone Wiki
Jump to: navigation, search
Colossus of the Sun
Regular 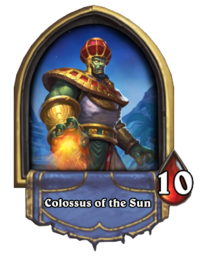 This titan colossus abhors all weakness.

Colossus of the Sun is a boss that can be encountered initially in Chapter 2 of Tombs of Terror. After completing Chapter 2, this boss encounter will be available in any completed chapter.

Hero power of this boss is easy enough to deal with. Trade your damaged minions or leave boss's minions at 1-2 HP (depending on normal or heroic difficulty) and keep your healthy ones, especially if they have some benefit. The best tool for saving your minions in this encounter is First Aid Kit and less Finley's Pith Helmet.

Normal deck has only two weak AoE (Whirlwind) that sometimes combined with Plague of Wrath. Most of minions are slightly synergize like Rage Warrior and they are not difficult to eliminate if your deck is faster and stronger than this one. Anyway, do not leave the enemy minions alive for long, especially Ragnaros, Lightlord, Tomb Warden and Colossus of the Moon, otherwise the boss will fully heal them with Neferset Ritualist, which may cause a problem for you.

In Heroic mode Colossus of the Sun gets a lot more AoE so it becomes almost impossible to play around his hero power with First Aid Kit. Band of Bees, Rocket Backpacks, and Scepter of Summoning passives are bringing much more value on this difficulty. Don't forget the boss can easily fill his board with huge minions by using Woecleaver so keep for them any powerful AoE/removals, for example, Brawl, Plague of Death, Runaway Gyrocopter, Staff of Scales, Addarah and Scales of Justice. Also with a bit of luck the boss can accidentally recruit N'Zoth, the Corruptor by Woecleaver and thus lose its powerful battlecry.

Colossus of the Sun
You will be punished, thief!

Brann Bronzebeard
We don't have ta fight. Some of me closest relatives are made o' mineral!

Colossus of the Sun
Silence!

Colossus of the Sun
Abolish your greed!
Judgment comes.
Shame!
Stealing is forbidden.

Colossus of the Sun
<grumpy sigh>
If curiosity does not kill them, I shall.
Why do they always have to look?

The power of wrath returns...

That is no mere toy.

What are you doing?!

Colossus of the Sun
Auugh..!

Colossus of the Sun
You have atoned for your transgressions.

The Colossus of the Sun is one of two giant statues (the other being the Colossus of the Moon) created to guard the artifacts that serve as the key to opening the chest containing the powerful Scepter of Orsis. They are both found initially buried to their chests in sand within the city of Orsis in Uldum, non-interactive until players attempt to take the artifacts from them. It is then they unbury themselves and become hostile.