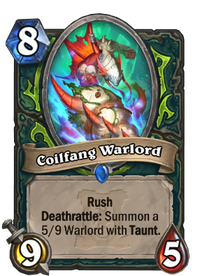 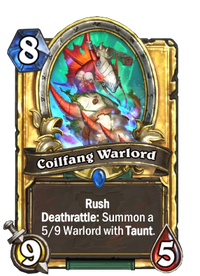 Prepare for the staunch conch launch!

Coilfang Warlord is a rare demon hunter minion card, from the Ashes of Outland set. 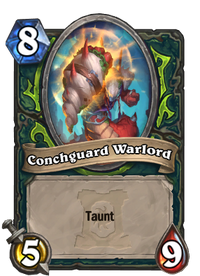 Coilfang Warlord provides a flexible mix of removal and and protection. This card is strongest when trading into a single large minion facing a board of medium or small minions, such as a Sea Giant in a Zoo deck or responding to Dragonqueen Alexstrasza. This removes the target while also putting a 5/9 Taunt into play. An 8 mana total statline of 14/14 with Rush and Taunt.

This card can also be played directly on an empty board, threatening your opponent with a 9 attack minion.

Summon
Out of your depth!
Attack
Impale!

Coilfang Warlord is a naga lord.

Naga lords are red male naga warriors with shells and other sea creatures fused to their bodies. They have no visible eyes, and a large hermit crab for a hand.

The Coilfang tribe is a tribe of naga. They are based in all parts of Coilfang Reservoir except the Underbog, where the Wrathfins have their holdings. Their presence threatens the draenei, trolls, and Cenarion Expedition that have carved out holdings in the area. The Coilfangs are led directly by their great matron, Lady Vashj.