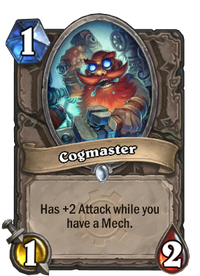 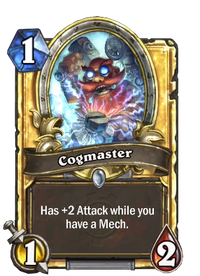 Has +2 Attack while you have a Mech.

After a while, you don't see the cogs and sprockets. All you see is a robot, a spider tank, a deathray...

Cogmaster is a common neutral minion card, from the Goblins vs Gnomes set.

Cogmaster can be obtained through Goblins vs Gnomes card packs, or through crafting.

A good early minion for a Mech-synergy deck. It can be played on turn 1, then followed by a Mech on turn 2 to activate its effect, allowing for efficient trades. Attack from behind an Annoy-o-Tron for maximum early durability.

Summon
I can fix anything!