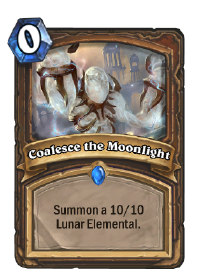 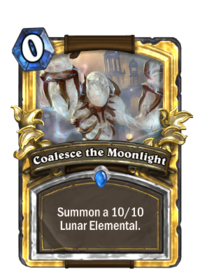 Coalesce the Moonlight was a card added with the One Night in Karazhan patch. The purpose of the card is unknown, other than that it was not a card available in regular play. The card may feature in the adventure or an upcoming Tavern Brawl, although the imported data erroneously stated that it was part of the Curse of Naxxramas set.

Notably, no data or images for the described Lunar Elemental were included in the patch.

The card appears to be related to Drink the Moonlight, added with the same patch.

As of Patch 7.0.0.15590 (possibly earlier), this card is no longer present in the game data, and therefore appears to have been removed from the game.