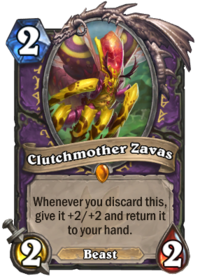 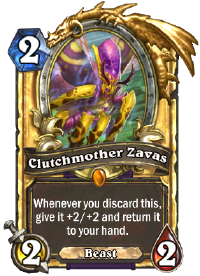 Whenever you discard this, give it +2/+2 and return it to your hand.

A bit of a snob: still refuses to drive anything with automatic transmission.

Clutchmother Zavas is a legendary warlock minion card, from the Journey to Un'Goro set.

Clutchmother Zavas can be obtained through Journey to Un'Goro card packs purchased online from the Battle.net shop, or through crafting.

Zavas's effect causes her to have obvious strong synergy with various discard effects, such as Doomguard, Soulfire, Lakkari Felhound and the Warlock quest Lakkari Sacrifice, making her a strong inclusion in Discardlock decks. As the Clutchmother is a very cheap minion, it can be very helpful with baiting high-value removals, even if she is only 6/6, making her a valuable minesweeper for even bigger minions.

Howlfiend can raise Zavas to particularly powerful stats. This is best when she is the only card in hand. Zavas's cheap cost also makes her a good target for Shriek and Reckless Diretroll.

Clutchmother Zavas is normally found as a rare silithid reaver mob inside the siltihid hive in the Slithering Scar of Un'Goro Crater. During the Un'Goro Madness micro-holiday, a large wasp version of her appears as an elite mob outside the entrance to the hive.