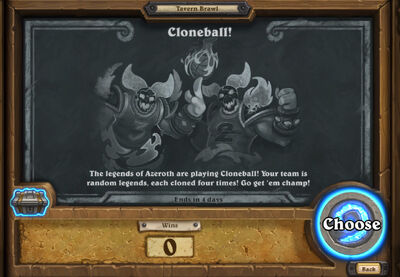 "The legends of Azeroth are playing Cloneball! Your team is random legends, each cloned four times. Go get 'em champ!"

Additionally, Cloneball! was one of nine Tavern Brawls featured as part of the 100th Brawl, A Cavalcade of Brawls!, when its mechanics were used by the priest class. Also it a part of the 207th Brawl, The 207th Brawl Spetacular!.

This Tavern Brawl sees players doing battle with randomly constructed decks. Each deck is composed of seven randomly selected legendary minions. The unique spell Offensive Play (0-mana spell that reduces the cost of the next legendary minion the player plays, and all other copies of that card, by 3) is given to the player at the start of their first turn, with one other Offensive Play at turn 3 and another at turn 5. 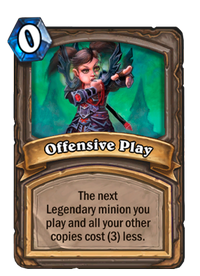