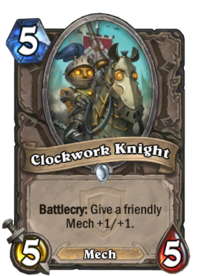 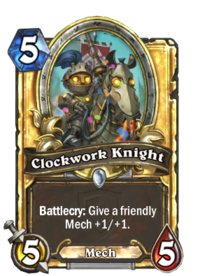 It takes a lot to wind him up.

Clockwork Knight is a common neutral minion card, from the Grand Tournament set.

Clockwork Knight can be obtained through The Grand Tournament card packs bought through the ingame Shop, purchased online from the Battle.net shop, or through crafting.

Clockwork Knight provides an option in Mech decks to help keep up pressure in the mid-to-late game, an area where Mech synergy decks often struggle. It is an excellent choice for this type of deck, and can allow you to keep initiative for longer than you typically could relying on low-cost minions. It could also be a valuable tempo play, curving out after Piloted Shredder, Mechanical Yeti or Gorillabot A-3.

The Clockwork Knight is one of the few combatants in the Grand Tournament who has to perform regularly scheduled maintenance on a steed. After the Clockwork Knight finishes tinkering, there are almost always some parts left over to upgrade fellow mechs on the battlefield![1]

The Clockwork Knight appears to be a gnomish invention, given the Gnomeregan banner visible in the background. 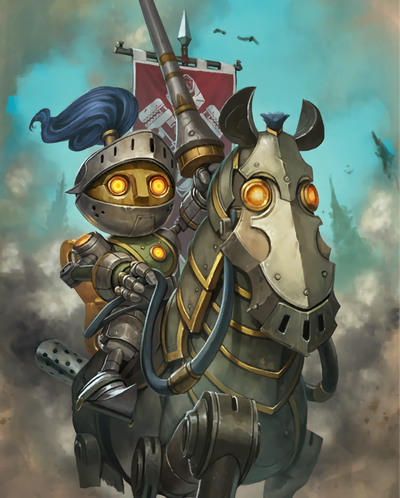