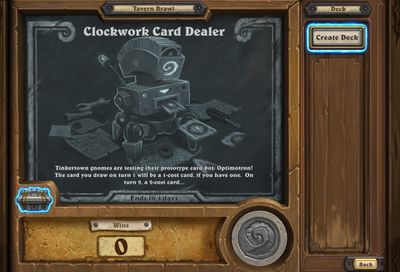 "Tinkertown gnomes are testing their prototype card-bot: Optimotron! The card you draw on turn 1 will be a 1-cost card, if you have one. On turn 2, a 2-cost card..."

Clockwork Card Dealer is a Tavern Brawl. It debuted on October 7, 2015.

In this Brawl, the card draw at the start of each turn will always try to draw a card whose mana cost matches the turn number, with a 1-mana card drawn on turn 1, a 2-mana card drawn on turn 2, and so on. If the deck lacks an appropriate on-curve draw on a given turn, a random card will be drawn instead (as per normal play). Players are able to create their own decks, using any class.

This Tavern Brawl allows players to live out their dreams of drawing their cards in a perfect order. By carefully crafting their deck, they can not only guarantee that they will draw a card that fits the curve, but also that said card is exactly the one they want. With enough care, players can create the perfect streak - a 100% predetermined deck.

This means that deckbuilding is of the utmost importance during this Brawl. Copying decklists from Play mode will usually yield very poor results. To succeed, you will need to create a predetermined deck.

A deck is 100% predetermined if it contains no cards that you do not want to draw between turns 1 and 10. In other words, for each mana cost, there must only be one possible card that can be drawn. There must only be one 1-mana card, one 2-mana card, and so on. The trick behind building a perfect streak is filling the remaining deck slots required for a 30-card deck with "filler cards" that do not disturb your sequence.

There are three ways to achieve this:

Drawing the perfect card each turn creates a unique dynamic that requires players to rethink common gameplay wisdom. Some cards do not fit the sequence at all. When building a 100% predetermined deck, consider the following advice:

Using a perfect streak deck has one major downside: There is not a lot you can do if you go second. As stated before, you will not be able to make use of the additional card you draw - unless it costs (1) or (2). Even The Coin may not be of much use. Therefore, it may be wise to include some redundant 2-cost cards to increase your odds if you lose the coin flip.

The dynamics explained above cause some cards to become much better than in a normal Play mode match. These include:

This Brawl is apparently administrated by Optimotron, a prototype clockwork card dealer created by the gnomes of Tinker Town. While Optimotron is original to Hearthstone, the gnomish quarter of Tinker Town is a longstanding part of Warcraft lore.

Tinker Town is the gnome quarter of Ironforge.

Originally, Tinker Town was just a small quarter of the city for gnomes visiting from Gnomeregan to use. When their clockwork city of Gnomeregan fell, it became the center of the gnomish court in exile (the Gnomeregan Exiles). Prior to the partial retaking of Gnomeregan, High Tinker Mekkatorque could be found here, along with his closest advisers. It is also home to a number of Alchemy and Engineering trainers, as well as the entrance to the famed Deeprun Tram.