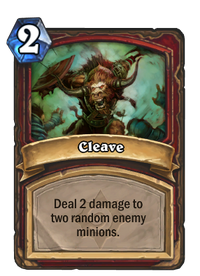 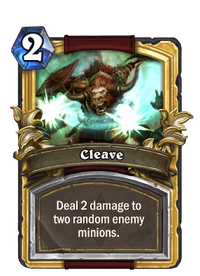 Cleave is a warrior spell card, from the Basic set.

Two copies of Cleave are a reward for raising a warrior to level 2.

Two Golden copies of Cleave are a reward for raising a warrior to levels 40 and 42.

Cleave is uncraftable and cannot be crafted or disenchanted.

Cleave is a relatively inexpensive area of effect (AoE) card with two caveats. You cannot choose which targets to attack.

In the right conditions, Cleave can be very effective for removing low health minions or lowering their health to vulnerable levels. Ideally used against precisely two minions, allowing the warrior to be certain of the spell's targets.

"Two bodies are better than one."

Cleave is a warrior ability from World of Warcraft. It is a melee attack that instantly deals a small amount of damage to the target and one additional nearby target. Cleave plays the role of a multi-target 'rage dump', allowing the warrior to burn off their excess rage using the ability, rather than simply wasting it. As such, Cleave is an inefficient attack, but is not on the global cooldown, allowing it to be used in-between other attacks in the warrior's rotation. Heroic Strike is a single-target alternative to Cleave, and is preferable for use on single targets.

This card has a similar function and shares artwork with the Cleave ability seen in the World of Warcraft Trading Card Game. 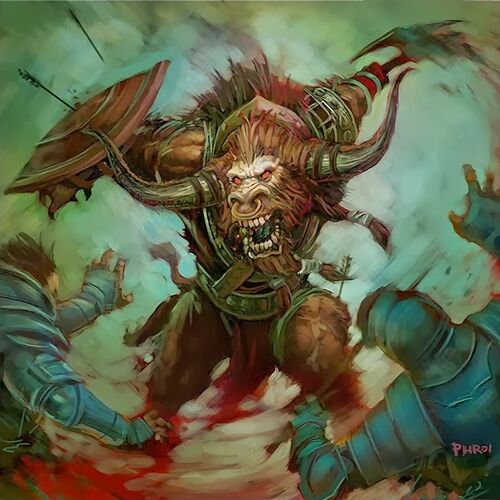