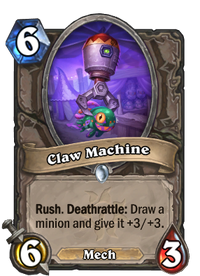 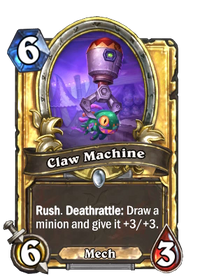 "I have been mrglrlglr… chosen!"

Claw Machine is a common neutral minion card, from the Madness at the Darkmoon Faire set.

Claw Machine can be obtained through Madness at the Darkmoon Faire card packs, through crafting, or as an Arena reward.

Tempo-wise, Claw Machine isn't the best 6-cost minion around. Even when played on curve, it's low health makes it unlikely to stay on the board for more than a turn, unless it's trading into a minion with no more than 2 attack. On the other hand however, its' 6 attack, combined with the "Rush" ability, make it a very useful, if not overly versatile removal tool. A comparison could be made with Evasive Wyrm, which bears the same cost, with a slightly different stat-line, and trading the Deathrattle buff for "Can't be targeted by spells or Hero Powers".

The not-insignificant buff of Claw Machine's "Deathrattle" must also be taken into account. Giving a minion +3/+3 is not to be scoffed at, especially if it happens to hit a relatively low-cost minion with "Taunt", than can then be played on an empty board. This "Deathrattle" is a key factor in making up for any tempo lost on Claw Machine.

Overall, Claw Machine is a solid minion to include in any control-oriented or menagerie build. The "Mech" and "Deathrattle" tags allow it to work extremely well with both "N'Zoth, the Corruptor", and "N'Zoth, God of the Deep" . Even when playing these two minions from behind, having a high-attack "Rush" minion in the res-pool allows you to make some advantageous trades. On a side note, the Deathrattle effect can also be exploited by any Hunter deck running "Jewel of N'Zoth".

Claw Machine appears to be a Gnomish Copter, similar to Sky Claw.