Clash of the Minions 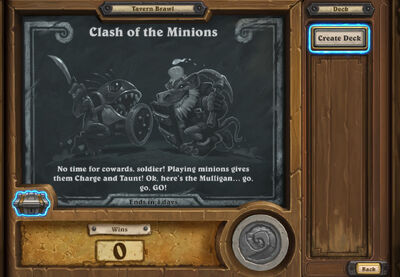 Clash of the Minions is a Tavern Brawl. It debuted on February 24, 2016. For exact times, see the schedule.

This Brawl sees players doing battle using custom decks using any class. Whenever a minion is played from the hand it gains a special enchantment, granting it the Charge and Taunt abilities.

Obviously, minions which naturally have Charge and Taunt are generally less valuable here due to the abilities being given to all minions. The Black Knight is a particularly strong legendary in this Brawl due to being able to destroy any opponent's minion. The warrior's Bolster is also a particularly strong option with the Taunt synergy.

Vulnerable and valuable cards ("soft taunt") are not recommended here, such as Knife Juggler or Cult Master, due to the opponent being able to immediately attack them after only one round. Conversely, Ancient Watcher becomes a cheap and effective 4/5 Taunt, for only 2 mana. Sylvanas Windrunner likewise gains value due to the difficulty in avoiding triggering her Deathrattle. Eerie Statue becomes a cheap 7/7 attacker and tank, though note that it can only attack if both sides of the field have been cleared beforehand.

There are only a few specifically synergistic cards, all belonging to the warrior: Warsong Commander, Bolster and King's Defender. The Black Knight is the sole negative synergy. Note that Warsong Commander will also grant her special effect to herself.

With every minion gaining Taunt, attacks against the enemy hero are impossible without Silences, forgetful effects, or first removing all enemy minions. This can give an advantage to direct damage decks oriented around spells and Hero Powers, such as Freeze Mage or Aggro Shaman. Weapons are generally less useful.

Gaining Charge makes high-Attack minions like Magma Rager and Core Hound far more valuable than they otherwise would be, making them especially effective as game finishers or for efficient trades. It also makes surprise burst combos far more viable. Windfury minions like Windfury Harpy, Whirling Zap-o-matic, Dust Devil and Raging Worgen present much more attractive options due to being able to attack immediately. Other offensive minions such as Frothing Berserker likewise become more dangerous. Molten Giant (and the other giants, although generally less accessible) become very powerful and immediate threats. Secrets notwithstanding, Deathwing is a guaranteed 12 damage to the face. In general, the prevalence of Charge makes the game move along more swiftly than usual, with shorter matches.

Provided that other enemy minions have been removed, a Rogue that has taken sufficient damage can make use of 0-Cost Molten Giants in combination with return to hand effects such as Shadowstep and Youthful Brewmaster to defeat an enemy hero, even at full Health.