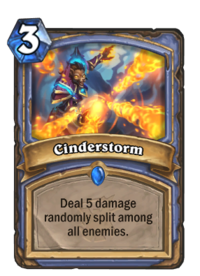 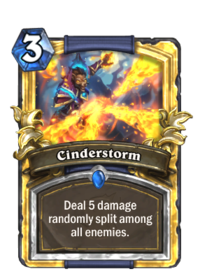 Forecast: Cloudy with a chance of fireballs.

Cinderstorm is a rare mage spell card, from the The Witchwood set.

A more expensive version of Arcane Missiles, with both a higher mana cost and damage value. In a vacuum, Cinderstorm is a poor deal for an upgrade, granting only 2 more damage for 2 mana.

However, an aggressive Tempo Mage deck can still make good use of Cinderstorm as a lower cost damage spell. The random spread of damage can clear enemy minions, or just provide extra burn on the enemy hero.

Cinderstorm is a level 100 Fire mage talent. After a short cast time, it causes the mage to throw a spread of 6 cinders that travel in an arc, each dealing a small amount of Fire damage to enemies it hits.