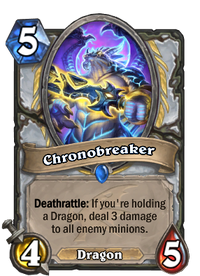 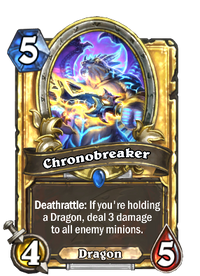 Deathrattle: If you're holding a Dragon, deal 3 damage to all enemy minions.

If he asks to borrow your watch, just say no.

Chronobreaker is a rare priest minion card, from the Descent of Dragons set.

This card has decent stats for its cost, but its deathrattle is quite valuable in keeping the opponent's board clear of smaller threats. However, the restriction on the deathrattle's activation can be a harsh one. Without a dragon in hand, this card is slow and has no impact. Should this card be generated by Galakrond, the Unspeakable, there are precious few priest-specific dragons to trigger it's deathrattle, the only 2 being Murozond the Infinite and Fate Weaver. This means Chronobreaker fairs significantly better in Highlander Priest, where you are more likely to put in more neutral dragons like Dragonqueen Alexstrasza and Cobalt Spellkin.

Summon
This timeline amuses me.

This minion appears to be a drakonid of the Infinite Dragonflight, exploring new alternate timelines. 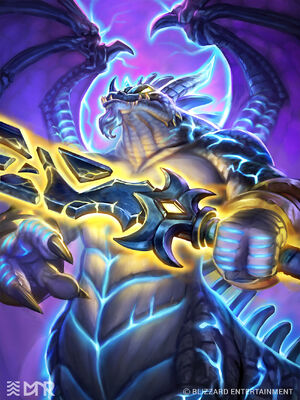