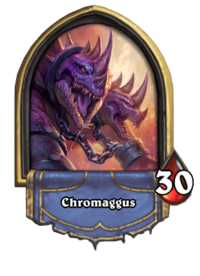 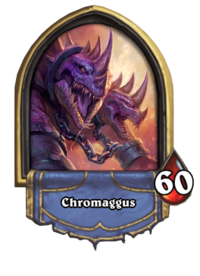 Nefarian has been busy experimenting! Yikes!

For the minion card of the same name, see Chromaggus

Chromaggus is a boss encounter found in the Blackrock Mountain adventure. It is the third encounter of the adventure's fourth wing, Blackwing Lair.

Contrary to speculation, the Chromatic Mutation card does not feature in this encounter and appears to have been removed from the game. 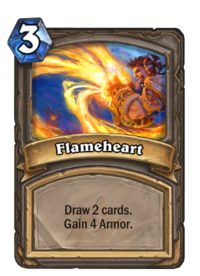 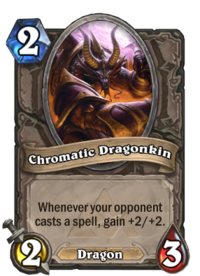 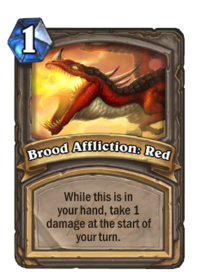 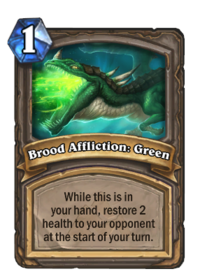 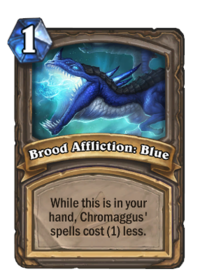 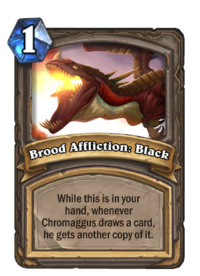 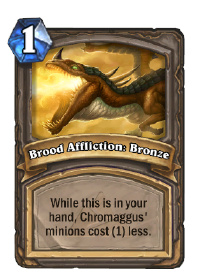 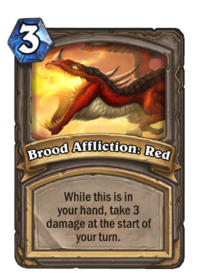 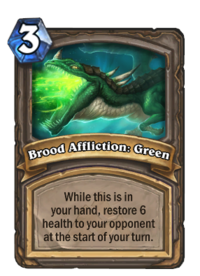 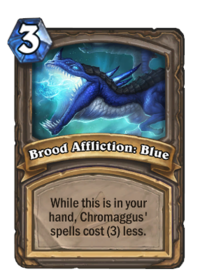 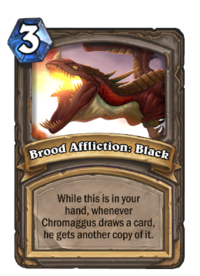 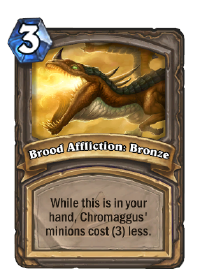 Chromaggus is generally a particularly tough encounter, with the player needing to spend extra mana to discard the Brood Affliction cards Chromaggus places into their hand each turn. That means the player will either need to spend mana each turn 'casting' the Brood Affliction cards in order to remove them from their hand, or else suffer their various undesirable effects each turn.

During mid-game, Chromaggus will start to use Dragon-synergy or related cards. He will also bring out Chromatic Dragonkin, which causes problems through its spell-synergy.

One approach is a paladin deck with Emperor Thaurissan and Kel'Thuzad. You will need a deck with good mana curve to fully spend your mana efficiently and the win condition will be Emperor Thaurissan followed by Kel'Thuzad. Priest is also recommended if you have cards like Lightwell, Lightspawn, Divine Spirit and Inner Fire. Chromaggus has no Silences, making high Health an extremely effective defence.

Brood Affliction: Green (Heroic) can even help you. After Whispers of the Old Gods, playing an Auchenai Soulpriest will make it nearly impossible, except killing the Soulpriest, to avoid taking 3 damage at the start of your turn.

In Heroic mode, Chromaggus' Brood Afflictions have stronger effects, and also cost 3 mana to remove (instead of 1), making them significantly more important and problematic to deal with.

One approach is a warlock deck, with turn 2-3 Life Tap (similar to handlock) to discard the Blue Affliction he gives you at his turn 3. On turn 4, play a 2-drop and tap, to also burn the 4th Affliction. Demonlock is effective, with useful ways to discard (e.g. Felstalker, Soulfire, Doomguard). You can also regain Health quickly with Queen of Pain and Demonheart. Don't put in too much card draw, since the game will probably go into the super late game and you already have your hero power.

A specific strategy for druid suggests the following:

Another possibility is to build a deck based on a Tempo mage shell, to take advantage of the fact that Brood Afflictions are spells and try and turn them against Chromaggus. Sorcerer's Apprentice will discount the Brood Afflictions, while Mana Wyrm and Flamewaker will deal more damage when the players casts more Afflictions. The boss will target the Flamewakers, so including Duplicates will help to not run out of threats. Chromaggus will also Flamestrike on turn 7 if it has the card in hand (which is highly likely by that time) and the player has a board, so a well-timed Counterspell can provide a crucial tempo gain by denying the boss its entire turn. 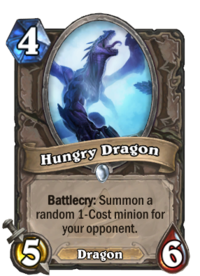 Nefarian
Chromaggus is one of my greatest achievements! Look at him!

Nefarian
I gave him two heads because I figured, hey, double the biting.

Nefarian
I infused him with the powers of all the dragonflights. He's perfect.

What’s worse than a horrible mutant dragon monstrosity that uses magic? A horrible mutant dragon monstrosity that uses five types of magic, obviously! Chromaggus unleashes abilities ripped from the flesh of all five dragon flights. Don’t ask how he got those powers. Viscera are involved. Hey, we told you not to ask! You’ll have to battle the chromatic horror before you can take on Lord Victor Nefarius.[3]

Chromaggus is a two-headed dragon beast in Nefarian's service, who resides in Blackwing Lair, coming after Flamegor and before Nefarian. He drops the Tier 2 shoulders for all classes.

One of the most challenging aspects to Chromaggus is the randomness of his abilities. As the name suggests (the word chromatic is derived from "khroma", the Greek word for "color", suggesting Chromaggus takes his powers from dragonflights of all colors), Chromaggus shimmers in a variety of colors, which relate to his current abilities. These abilities are determined upon instance creation, and will only be reset with the instance timer.

Despite his canine appearance, he's actually a dragonkin. It is speculated that he was created by Nefarian experimenting on captured Core Hounds, such as The Beast found in Upper Blackrock Spire, possibly by feeding or injecting dragon blood from various dragons from all dragonflights.

Rather than benefiting Chromaggus, an earlier version of this encounter had the boss' special cards punishing the player, such as increasing the cost of their minions. However, in testing the developers found this design to be "too stifling".[4]

Another prototype design for this encounter saw the player replaced by a Chromatic Dragonkin hero, whose hero power Mutation would cause them to discard a card from their hand.[4]