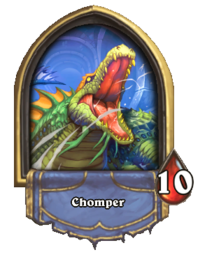 Chomper survives the sewers by snacking on smaller minions.

Chomper is a boss that can be encountered in chapter 4 of The Dalaran Heist.

Chomper is original to Hearthstone.