Warning: there is more than one data page for cards with this name.

Please identify which of these data pages are for the card this page is supposed to cover. Data:Cards/Cho'gall(35303), Data:Cards/Cho'Gall(463957) Once it is identified, please edit this page and use the |datapage parameter on {{Card infobox}} to ensure data is pulled from the correct page.

As an example, if the correct data page is Data:Cards/Barrel(376), then this page would need {{Card infobox|datapage=Barrel(376)}} to ensure it finds the correct page. 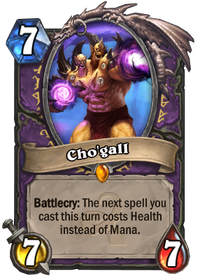 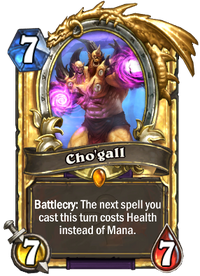 Battlecry: The next spell you cast this turn costs Health instead of Mana.

Even after all this time, Gul'dan still makes Cho'gall go get donuts and coffee.

Cho'gall is a legendary warlock minion card, from the Whispers of the Old Gods set.

Cho'gall can be obtained through Whispers of the Old Gods card packs, or through crafting.

This card's Battlecry creates a cost-modification enchantment attached to your player. This enchantment causes all your spells to cost damage instead of mana, but wears off as soon as you play a spell or at the end of your turn (whichever happens first). More precisely:

Example: Playing Mortal Coil after the opponent has played Loatheb will deal 6 damage to you.

Example: If a hero at 8 Health with Cursed Blade equipped plays Cho'gall, he or she can cast a 5-Cost spell such as Brawl (since the hero's Health is greater than 5), but Cursed Blade will double the damage to 10, killing the hero.

Example: Playing Forbidden Ritual after Cho'gall will cost the player 0 Health (instead of 0 mana), and then consume all of the players' mana as usual in order to generate Icky Tentacles.
Example: Summoning Stone's effect will always summon a 0-Cost minion if you played Cho'gall before playing the spell, since no mana has been spent.[8] (This interaction may have changed in Patch 6.0.0.13921 (ONiK patch), as a user reports that the staff from Medivh, the Guardian gives you the full cost of the spell played after Cho'gall.[9])[verification requested]

Example: If you have both Bloodbloom and Cho'Gall's effects active, you pay Health instead of mana for the next spell you cast that turn, then the effect ends. You do not get to do it for two spells in a row, and you don't pay Health twice.[10][11]

While Cho'gall's Battlecry is powerful on paper, he's held back by the limited selection of synergistic Warlock spells. Their single-target removal is rather low-powered and their board clear will damage your side of the board as well. Not to mention it will put a dent to the Warlock's Health pool, which they need to conserve.

The most useful Warlock spells to use with Cho'gall are Shadowflame for a devastating board clear that doesn't hurt your own board, Dark Bargain, Siphon Soul, or Blastcrystal Potion for hard removal, or Kara Kazham! to build your own board.

With Mean Streets of Gadgetzan, Cho'gall has more opportunities to be useful. Getting a good Mage spell out of a Kabal Courier can be game changer and even the few potions from a Kabal Chemist can be situationally effective: for example, using Dragonfire Potion instead of Felfire Potion if you want to wipe the board but also conserve your Health. Kazakus Potions are also very powerful, and while the 10-Mana potions will bring you a third of the way to death, it doesn't matter if you can play Reno Jackson the next turn.

Summon
To his will all flesh succumbs! (What he said!)

Cho'gall (sometimes spelled Cho'Gall) was a powerful ogre mage, Initiate of the Fifth Circle of the Shadow Council, and Chieftain of the Twilight's Hammer clan. Cho'gall managed to survive with remnants of his clan when Gul'dan was torn to shreds by demons during his quest to find the Eye of Sargeras toward the end of the Second War. Fleeing to Kalimdor and taking refuge within the ruined city of Ahn'Qiraj, Cho'gall's body became warped by the power of the Old God C'Thun.

With the return of Deathwing and the Shattering that followed in his wake, Cho'gall aligned himself and the Twilight's Hammer with the corrupted Aspect and his allies, the powerful Elemental Lords Al'Akir and Ragnaros, to help usher in the end times. Overseeing the cult's efforts from his citadel in the Twilight Highlands, Cho'gall was struck down by champions of Azeroth within his own throne room.

Cho is the name of the ogre's two-eyed right head (shown on the left), while Gall is the name of the one-eyed left head (shown on the right). Each speaks with its own voice and indeed has its own personality, the two at times even clashing over the actions to be taken by their one, shared body. Cho is generally held to be the primary personality, with Gall's in-game quotes often displayed in parentheses following Cho's lines; Gall often responds to Cho's quotes rather than speaking for himself. While Cho's voice is deep and powerful, Gall's is higher-pitched and more maniacal.

In Heroes of the Storm Cho has control over the ogre's massive body, while Gall is powerless but to be carried wherever Cho goes. While Cho therefore controls the body's brutish strength, Gall commands the majority of the pair's warlock powers.