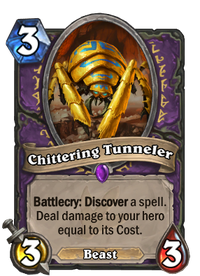 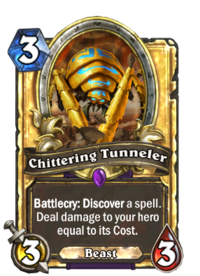 Battlecry: Discover a spell.
Deal damage to your hero equal to its Cost.

Chittering Tunneler is an epic warlock minion card, from the Journey to Un'Goro set.

Chittering Tunneler can be obtained through Journey to Un'Goro card packs, or through crafting.

Playing this minion with a Violet Illusionist, makes its Battlecry much more favorable, as being immune will negate its downside.

This minion's flavor text is a reference to Babbling Book's summoning quote. This is commonly believed to be a tribute to Pavel, who won the 2016 Hearthstone World Championship with the help of Babbling Book, but is actually not, according to Mike Donais.